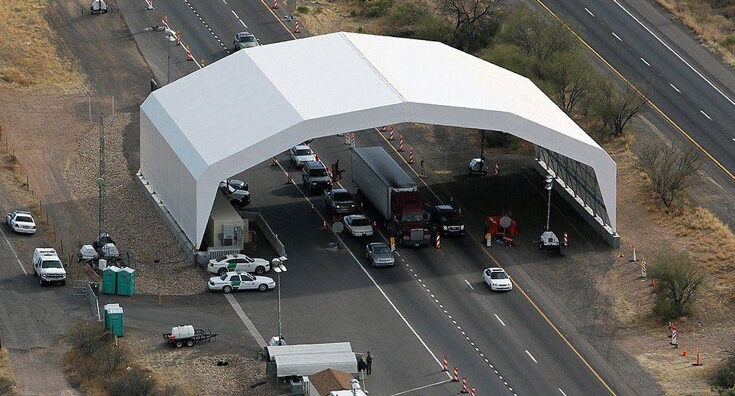 Contributed File Photo/Courtesy U.S. Customs and Border Protection: Border Patrol agents assisted a woman out of her crashed vehicle just before it exploded into flames north of the Interstate 19 Immigration Checkpoint near Amado.

AMADO – U.S. Border Patrol agents were the first to arrive at a serious vehicle rollover accident that occurred just north of the Interstate 19 Immigration Checkpoint near the Arivaca exit on Saturday.

Shortly before noon, a 66-year-old female driver lost control of her SUV in the southbound lanes of I-19 about a quarter-mile north of the checkpoint, rolling her vehicle several times. The SUV landed on its passenger side and caught on fire.

Tucson Sector agents working the checkpoint immediately responded. They freed the woman, the SUV’s sole occupant, and moved her a safe distance away to the median of the interstate. Moments later, there was a large explosion, and flames engulfed the SUV.

Agents then directed traffic and created a landing zone for an air ambulance, which arrived to medically transport the woman to a local hospital.

The men and women of the U.S. Border Patrol often start their days as law enforcement officers and end them as medical first responders. Tucson Sector has over 240 agents certified as EMTs and nearly 50 on the Border Patrol Search Trauma and Rescue Team. They go to work every day in order to keep our communities safe.