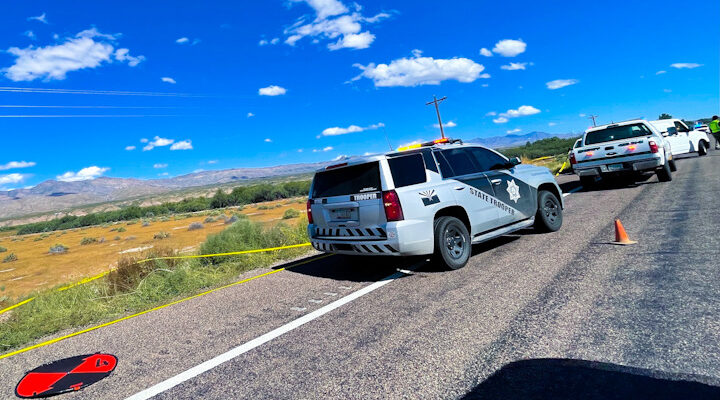 Gila Herald Photo: A body, believed to be that of Eva Joy Martinez, was found a quarter-mile from the Fort Thomas Café on Saturday morning just off U.S. Highway 70. She had been missing from the area for two weeks.

FORT THOMAS – A body, believed to be Eva Joy Martinez, was found early Saturday morning, roughly a quarter-mile from the Fort Thomas Café where she had last been seen. The body will have to be forensically identified during an autopsy.

A family-led search for Martinez had been ongoing since she was last seen at the café on Sept. 24, between 8:30 and 9 p.m. Now, that search is over.

The search increased in size Friday after the family requested additional community assistance. On Saturday, a Native-American male located the missing woman roughly 10 to 20 feet off of U.S. Highway 70 in the brush.

The Graham County Sheriff’s Office is treating the scene as a crime, and an autopsy will be performed by the Pima County Office of Medical Examiner to confirm Matinez’s identity and list the cause of death.

The GCSO cordoned off the section off the road with crime scene tape and closed the westbound section of Highway 70. As of 1:45 p.m., traffic was still being led through the area one direction at a time. The Arizona Department of Public Safety and a Pima Police officer were assisting at the scene.

Graham County Sheriff P.J. Allred advised that the Sheriff’s Office’s investigation into the death had just begun and it is too early to determine how and when Martinez died and that the autopsy should reveal that information.

Update: The preliminary findings based on a verbal summary given to the Sheriff’s Office by the Pima County Office of Medical Examiner advised the injuries to the female victim are consistent with a vehicle collision.  The investigation is ongoing.

The Graham County Sheriff’s Office is asking for anyone who has information that could assist in this on-going investigation to call (928) 428-3141.