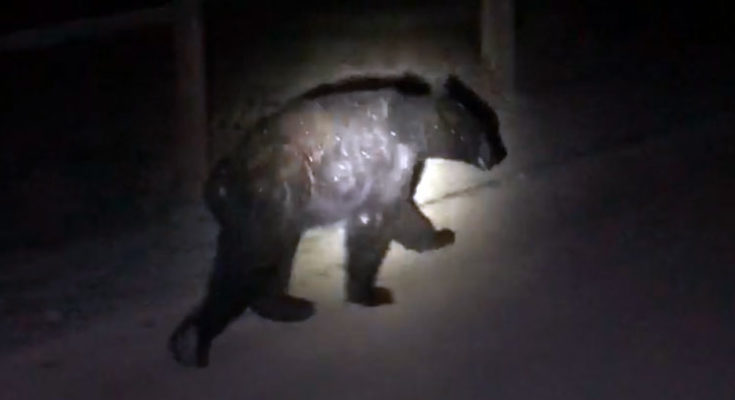 Contributed Photo/Courtesy Beau Pender: A black bear walks near residences Wednesday. Beau Pender walked the bear off his property and toward the Stockton Wash area.

GRAHAM COUNTY – Residents and motorists south of Safford were surprised to see a black bear walking along the road Wednesday.

A Graham County Sheriff’s Office deputy was dispatched at about 4:54 p.m. to the area of W. Quatro Cerros Road regarding a bear sighting. County Dispatch then advised the bear was last seen in the area of Rawhide Lane and U.S. Highway 191.

The deputy spoke with a motorist who had seen the bear, and she advised the bear had run off into the desert to the east of Rawhide Lane and U.S. Highway 191. County Dispatch also advised that the Arizona Game & Fish Department had been contacted concerning the bear.

The deputy searched the area but could not locate the bear. He stated in his report that the area is heavily wooded and there are no nearby houses.

Later that early evening, the bear was spotted by Beau Pender in his yard off Antelope Lane. Pender walked the bear off down toward Stockton Road and video recorded his encounter. He told the Gila Herald that he last saw the bear headed toward the Stockton Wash area.

Pender also advised that they called the Sheriff’s Office and AZGFD about the bear but did not get a response.

Bears are classified as big game animals in Arizona and are protected by state law.

Black bears generally avoid people, but if they begin to associate people with food they may become aggressive. If you see a black bear in your neighborhood, call 911 and the Arizona Game & Fish Department at (623) 236-7201. Removal of a bear is usually a last resort, however, and they are generally allowed to find their range/home as long as it is not near occupied areas. The AZGFD removes bears when they present an imminent threat to human safety or when they are in a situation where they cannot safely escape on their own.

They are typically solitary animals (except in breeding pairs or a mother with her cubs) and usually eat berries, cactus fruit, roots, insects, and sometimes livestock.

Black bears primarily live at elevations from 4,000 to 10,000 feet and generally hibernate from November through March. The bear seen south of Safford is likely in its first year not hibernating with its mother.

According to the Eastern Arizona Almanac, Mount Graham is the home to the densest concentration of black bears in the Southwest.