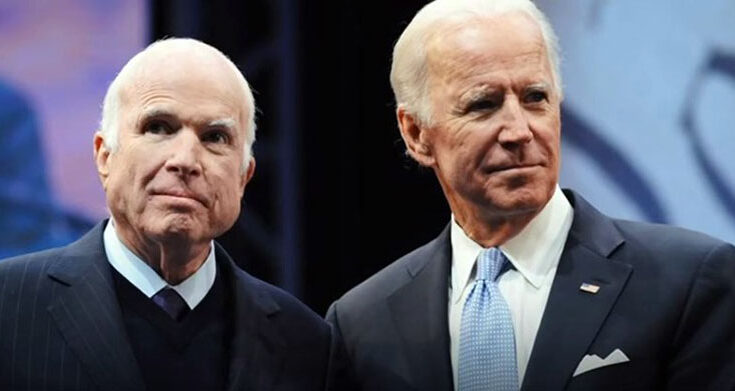 Photo Courtesy of the Biden Campaign: President Joe Biden often spoke of his relationship with the late Sen. John McCain, left, an Arizona Republican, who will be honored by Biden next with the Presidential Medal of Freedom.

WASHINGTON D.C. – Arizona icons Gabrielle Giffords and the late John McCain were among the 17 recipients of the Presidential Medal of Freedom announced Friday by the Biden administration.

Also in the group is Khizr Khan, a Gold Star father who rose to prominence defending McCain against attacks by then-candidate Donald Trump. Khan said Friday that he was having a hard time explaining the “gratitude and honor that I feel that I’ll be in the same ceremony” as McCain.

“It’s an amazing sentiment at this point that I’m still trying to get a hold of,” Khan said Friday.

More than 600 people have been awarded the medal, the nation’s highest civilian honor since it was established by President John F. Kennedy, but relatively few appear to have been from Arizona. They include former Supreme Court Justice Sandra Day O’Connor and Annie Dodge Wauneka, who was honored in 1963 for her work to improve health in the Navajo Nation.

The medal is presented to individuals who have made significant contributions to “prosperity, values, or security of the United States, world peace, or other significant societal, public or private endeavors,” the White House said in a statement Friday.

The 17 announced Friday are the first for President Joe Biden – who was himself honored with the medal by President Barack Obama. Biden is scheduled to present the medals Thursday at a White House ceremony.

Sen. Mark Kelly, D-Ariz., who is married to Giffords, tagged McCain’s widow, Cindy, in a tweet Friday celebrating the honor and saying they “might be the proudest spouses in Arizona right now.”

“I can’t think of two Americans more deserving of this honor,” Kelly wrote of Giffords and McCain being named.

Giffords represented the Tucson area in Congress for five years before she was the target of an assassination attempt during a constituent event at a Tucson grocery store in January 2011. The mass shooting killed six people and wounded 13, including Giffords, who nearly died and still grapples with health issues from that attack.

Giffords, who subsequently became an advocate for gun reform, said she was “so very humbled and honored” by news of the award.

“Since I was shot more than 11 years ago, my personal recovery journey has taught me that it’s not the setback that defines us: it’s how we respond to it,” Giffords said in a statement that referenced how she had to relearn “how to talk and how to walk.”

Giffords is the head of a self-named group – Giffords – that works to end gun violence in America through the Giffords Law Center, Giffords PAC, and advocacy. The announcement of the medal comes just days after Biden signed the Bipartisan Safer Communities Act into law, the first major gun-reform legislation to pass Congress in decades.

“President Biden signed into law the first major gun safety legislation in nearly 30 years,” Giffords said in her statement Friday. “It is the honor of a lifetime to receive this award. Mr. President, I am exceedingly grateful for this recognition, and I look forward to persevering with you in this fight.”

McCain, who died in 2018, will be honored posthumously for his service as a veteran who spent five years in a North Vietnamese prison, and who represented Arizona in Congress, serving two terms in the House and six in the Senate. Biden has often talked about his special friendship with and admiration for McCain, who was the GOP nominee for president in 2008 in a losing bid against Biden and Obama.

McCain’s son Jack said in a statement Friday that the family was “extremely honored” by the award.

“As a man who dedicated his life in service of his country, I know my dad would be very humbled to receive the nation’s highest civilian honor,” the younger McCain said.

Evelyn Farkas, executive director of the McCain Institute, praised the late senator as a man whose “persistent and principled pursuit of his ideals and his legacy of integrity-driven leadership remains an inspiration to people all over the world.”

“We look forward to continuing to carry on Senator McCain’s legacy by boldly defending democracy, human dignity, and security around the world,” she said in a statement.

McCain was a hero to Khan and his family. Khan said one of his last conversations with his son, Army Capt. Humayun Khan, was about McCain’s book “Why Courage Matters.” A short time later, Humayun Khan was killed in action in Iraq in 2004.

When Trump attacked McCain on the 2016 campaign trail, Khan, a lifelong Republican, landed a prime speaking slot at the Democratic National Convention to defend the Arizona senator.

“Senator McCain had meant so very much to us,” said Khan, who is being honored for his work as founder of the Constitution Literacy and National Unity Center and as an advocate for rule of law and religious freedom on the U.S. Commission on International Religious Freedom.

“I am honored … and it means so very much to me and my family,” Khan said. “I am still grappling to understand the great honor that this Presidential Medal of Freedom brings.”