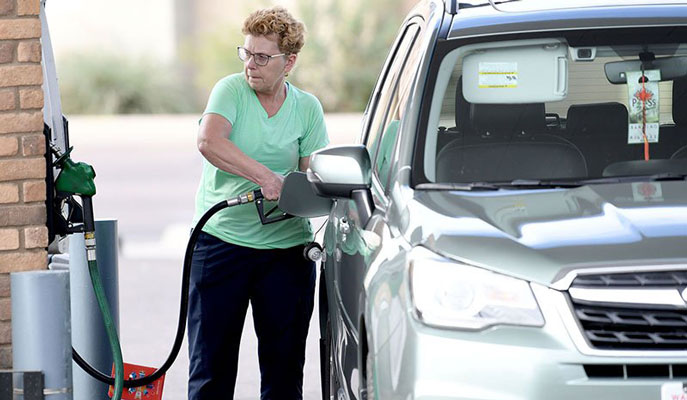 Photo by Kevin Hurley/Cronkite News: A woman pumps gas Tuesday in downtown Phoenix. The average price of a gallon of regular unleaded in Arizona was $3.74, a 60% increase from the same time last year. The Biden administration will release 50 million barrels of oil from the Strategic Petroleum Reserve in hopes of taming surging gas prices.

WASHINGTON – The Biden administration said Tuesday that it will release 50 million barrels of oil from the Strategic Petroleum Reserve in an effort to drive down the surging cost of gasoline and home heating oil.

The move comes as gas prices have risen more than 60% from where they were at the same time last year, with Arizonans paying an average of $3.74 a gallon, compared to $2.22 a year ago.

Experts said the move is not likely to lower prices immediately, particularly with holiday driving demand, and even President Joe Biden urged patience as he announced the plan Tuesday.

“It will take time, but before long, you should see the price of gas fall where you fill up your tank,” Biden said.

The U.S. release of oil is being done in conjunction with similar releases by other major energy-consuming nations, including China, India, Japan, South Korea, and the United Kingdom.

“This coordinated action will help us deal with a lack of supply which in turn helps ease prices,” Biden said.

While response to the move was generally positive, most noted that it is just a short-term solution.

Biden acknowledged the larger problem but said he was intent on doing something now.

“In the longer term, we’ll reduce our reliance on oil as we shift to clean energy. But right now, I’ll do what needs to be done to reduce the price you pay at the pump,” he said.

But with holiday travel coming up, gas prices are likely to continue to rise for the immediate future, as demand drives up prices, said Aldo Vazquez, a spokesman for AAA Arizona

“When it comes to Thanksgiving, people are going to be paying more at the pump,” Vazquez said. “Most of the travelers that are going to be moving around the country for the holiday are going to be driving to their destinations so that’s going to increase the demand for gas.”

“Gas prices have been rising across the country over the last several weeks,” Vazquez said. “Nationwide, prices are going up, but here on the West Coast, prices are historically higher than the national average.”

Biden said the oil release was just one step his administration is taking to fight inflation, starting with efforts to open supply chain bottlenecks by meeting with shippers and retailers to improve the flow of goods through ports and onto store shelves. Those moves are already starting to pay off, he said, with goods moving quickly and cheaply “out of our ports, onto your doorsteps and onto store shelves.”

“Families can rest easy,” he said of fears that there might be shortages of traditional Thanksgiving meal foods. “Grocery stores are well-stocked with turkey and everything else you need for Thanksgiving.”

“Today, we’re launching a major effort to moderate the price of oil, an effort that will span the globe and ultimately reach your corner gas station, God willing,” Biden said.

Under the administration’s plan, 32 million barrels will be released from the Strategic Petroleum Reserve, the world’s largest supply of emergency crude oil, over several months. The remaining barrels will come from the acceleration of a sale already authorized by Congress.

The U.S. Energy Information Administration said the country used an average of 18.19 million barrels of petroleum a day in 2020, which had the lowest level of consumption since 1995 due to COVID-19. Some critics questioned whether the release of 50 million barrels would have a lasting effect on Americans.

“Congress gave the president and secretary of energy broad authority to manage the SPR and it’s the administration’s responsibility to exercise that authority as they see fit,” said Frank Macchiarola, a senior vice president at the American Petroleum Institute.

“We believe that any impact resulting from an SPR release is likely to be short-lived unless it is paired with policy measures that encourage the production of American energy resources,” he said in an emailed statement.

But Kassie Siegel, director of the Center for Biological Diversity’s Climate Law Institute, said increased production is the wrong way to go. She joined others saying that Biden’s move will do little in the long run.

“Price volatility will always be part of Big Oil’s playbook, along with poisoning people and our planet for profit. That’s why President Biden wisely said we need to transition off of oil,” she said in an emailed statement.

“Now is the moment to keep that promise by urgently speeding the transition to electric cars and a renewable energy grid,” her statement said. “Americans are rightly fed up with oil companies’ control of their livelihoods, so let’s break their stranglehold on our economy once and for all.”