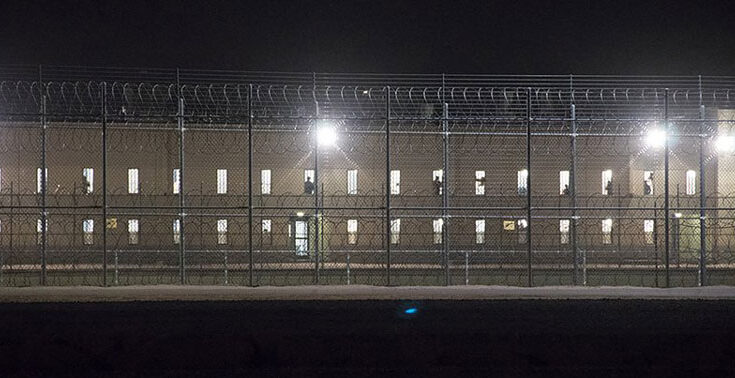 Photo By Peg Hunter/Creative Commons: Detainees are silhouetted against windows of the Eloy Detention Center in this November 2018 photo. Eloy is one of the privately-run prisons in Arizona that hold immigrant detainees under a contract with Immigration and Customs Enforcement. President Joe Biden this week ordered that the Justice Department phase out contracts with privately run prisons, but the order does not affect ICE contracts.

WASHINGTON D.C. – President Joe Biden’s order that the Justice Department stop contracting with private prisons could eventually affect thousands of inmates – but not the roughly 3,000 immigrants being held in private facilities in Arizona.

Biden said Tuesday that his executive order is part of an effort to promote racial equity and is needed to “stop corporations from profiteering off of incarcerating” people in facilities that he said are less humane and less safe.

But the order only applies to the Justice Department, which contracts with private firms to operate 12 prisons housing about 14,000 inmates nationwide. It does not affect Immigration and Customs Enforcement contracts with companies that hold immigrants awaiting hearings or deportation.

ICE’s Phoenix field office has contracts to hold immigrants at four facilities in Arizona: the Central Arizona and Eloy detention centers and the Florence and La Palma correctional centers, all run by CoreCivic Inc. The average daily detainee population for those units combined was 3,070 at the end of fiscal 2020, according to ICE data.

Advocates like Eunice Cho, a senior staff attorney with the American Civil Liberties Union’s National Prison Project, were disappointed with the order. She called it “an important first step” but said Biden needs to take the next step and end contracts immigration agencies have with private firms.

“We need to ask what purpose these prisons have besides locking people up for profit,” Cho said.

Cho studied the La Palma Correctional Center in Eloy for the ACLU and found abysmal conditions, including threats of force and a lack of medical attention and legal information.

But CoreCivic insisted in a prepared statement that its facilities are “safe and secure for those in our care and our staff.”

“We’re extremely proud of the critically important services we’ve provided to the BOP (Bureau of Prisons) for more than two decades, along with our other federal, state, and local partners in the 21 states we currently operate,” the company said.

As for the reason to keep working with private firms, the CoreCivic statement said those contracts provide state and federal government agencies the “flexibility to manage ups and downs in their populations” without having to build their own facilities. The statement also said the company has no role in determining how many inmates it gets, or for how long.

The company went on to say that it was not surprised by Biden’s order, since there has been a “steady decline in inmate populations over the past several years” from the Bureau of Prisons.

The order revives one issued in 2016 by President Barack Obama – which also did not deal with ICE contracts. When President Donald Trump took office in 2017, he reversed the Obama order.

Biden’s order does not end current private-prison contracts, it just directs the Justice Department not to renew them once they expire.

Cho said the failure to include immigrant detention facilities in the order is doubly troubling since there are better, safer ways to hold migrants.

“ICE doesn’t need to contract with private prisons to hold all these people,” Cho said, noting that the agency has capacity for 40,000 detainees at more than 220 public and private facilities.

ICE said it has detained 14,195 people since October in public and private facilities across the country. But instead of being held in prison, Cho argues that most immigrants awaiting trial should be on home detention with friends and family.

Clark Neily, vice president of criminal justice at the Cato Institute, said he was not impressed with Biden’s order.

He worries that private firms frozen out of contracts with one federal agency could just turn around and sign up with other federal or state agencies without making changes to the facilities or improving the lives of inmates. More prisons is not the answer, he said.

“I think it is an incredibly easy thing to do, it is basically window dressing,” Neily said of Biden’s order. “I would not consider this as substantive criminal justice reform.”

Cho said it’s time for him to live up to that promise now.

“Biden should cancel these contracts and withdraw the billions spent on immigration enforcement,” Cho said.