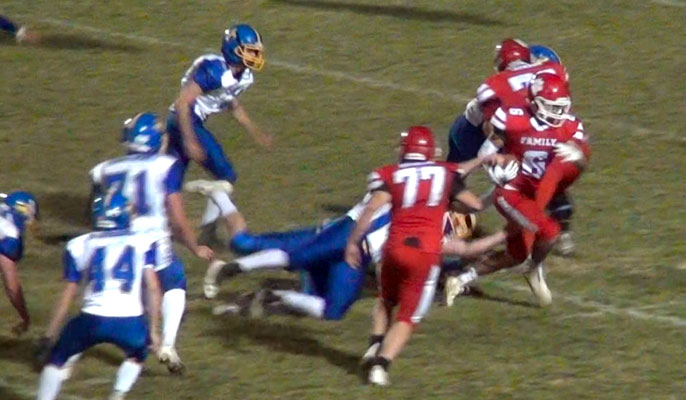 BENSON – That smell. The smell of fresh-cut grass permeated the air as I walked up toward the football field at Benson High School on Friday night.

Tonight would be the last night most if not all of the seniors from Pima High School would feel the popping of the pads – hitting and being hit – the elation and roar of the crowd along with the high of executing a play to perfection, and the despair of just coming up short. However, the lessons learned, and the camaraderie of their teammates will last a lifetime.

In the uncertainty of this season plagued with cancelations due to COVID-19, the pugilists of the playing field got to leave it all out there one last time and showed their mettle. The Roughriders won the second half, scoring in the waning moments of the hard-fought game and holding Benson scoreless for the final two quarters. But the Bobcats came out furiously in the first half and left to battle another day with the 28-7 victory.

The Bobcats started well and converted a 4th down attempt before shooting themselves in the foot deep in Pima territory with penalties, including a 15-yard unsportsmanlike call for arguing with an official over not getting a pass interference call. On 4th and 27, Benson went for it but Pima’s defense held, getting the turnover on downs. Then it went downhill for the Roughriders and fast.

On Pima’s first offensive possession, Benson’s Dalton Crockett got just enough of Caleb Barlow’s arm as Barlow hurdled a defender. The ball popped out and Mundo Esparza snagged it on a hop and took it back 43 yards to paydirt to put Benson on the board 7-0.

Lightning then struck twice and on Pima’s second offensive play of the game, Benson’s Wyatt Wilharm ripped the ball away from Wyatt Wiltbank in some Wyatt on Wyatt crime. Wilharm took off 40 yards for the score to put Benson up 14-0 in the blink of an eye.

Pima took the hits and came back swinging, however, and moved the ball down the field with an impressive throw by Kaleb Blair and an even more impressive catch by sophomore receiver Grant Ashby, who stretched out to snag the long pass, which put the Roughriders near mid-field. Ashby is one to watch in the coming two years for sure.

Both teams changed possession a few times with punts and then Benson utilized its harrowing run game to move the ball into the red zone. The Bobcats have no passing game whatsoever, but its running game is formidable.

After muscling their way to the 1-yard line, Devin Bowling finished the drive with a plunge into the endzone to put the Bobcats up 21-0.

After another Pima punt, Bowling showed off his moves as he zigged and zagged through Pima defenders and reversed his field on a long punt return to put Benson back in business at the Roughriders’ 36.

Fullback Gabe Osuna finished off the drive with a 2-yard run, and Benson went into halftime up 28-0.

Pima came out throwing in the third quarter and had good success moving the ball through the air. Just as it looked like they were about to get on the board, however, a pass sailed away from Blair and Esparza notched his second takeaway of the night as he gathered up the INT just outside the goal line. He then returned the ball near mid-field.

Then the game got a little sloppy. Benson gave the ball back on a mishandled handoff fumble recovered by Pima’s Sam Ray. And then Pima gave it back on a poorly executed halfback pass by Caleb Barlow that was intercepted.

Later, in the fourth quarter, Benson fumbled again and the ball bounced backward and backward until Pepper Hughes of Pima snagged it and returned it into Benson territory.

Again it looked as if Pima would score, but another ill-fated halfback toss attempt on a 3rd and 3 led to a 15-yard loss as Bowling came in unabated and made the play.

Pima’s defense answered the call again, however, and Nash Hughes popped the ball out of Benson’s Angel Rigney after a nice gain and Austen Ashby recovered for the Roughriders.

This time, Pima wouldn’t be denied, and Blair opened the drive with a 20-yard scramble to mid-field. He then hooked up with Grant Ashby again for a 20-yard pickup on a slant across the middle of the field. And capped off the drive with a 9-yard TD back-shoulder pass to Grant Ashby in the endzone to avoid the shutout.

The Bobcats left the field victorious, 28-7, and will welcome the No 8 Morenci Wildcats (4-1 region, 7-1 overall) on Friday, Nov. 27, in the quarterfinals of the state playoffs.

Morenci won its play-in game against Maricopa Sequoia Pathway by forfeit after the Pumas had to cancel due to COVID-19 quarantine. Morenci lost its regular-season matchup with Benson, 6-12, on Oct. 30. They are the top-two teams in the San Pedro Region.

Benson head coach Chris Determan said his team needs to perform better going into the playoff than they did in the play-in game.

“The playoffs are zero, zero,” he said. “Right now, everybody is zero, zero. You gotta play better to be a champion. And if you block like that and play like that, and do some of the things that we did and screw up, it’s (not) going to happen. So, we need to get better.”

In other local action: the then-No. 12 Thatcher Eagles upset the No. 5 Arizona College Prep Knights, 27-22, to advance to the 3A quarterfinals. The now-No. 8 Thatcher Eagles will travel to Yuma to take on the No. 1 Yuma Catholic Shamrocks on Friday, Nov. 27, starting at 7 p.m.

All three former 2A powerhouse teams who were moved up to 3A (Thatcher, Round Valley, and Phoenix Christian) are in the state playoffs quarterfinals.

Then No. 4 American Leadership Academy ended then No. 13 Safford’s season, 35-8. 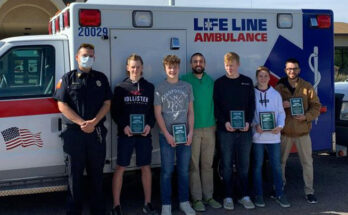 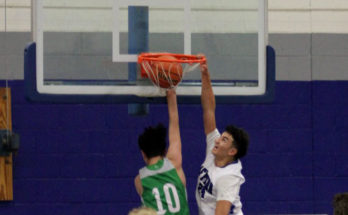 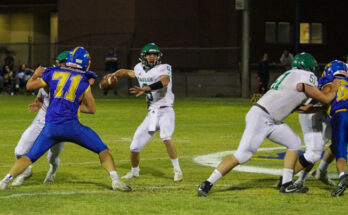