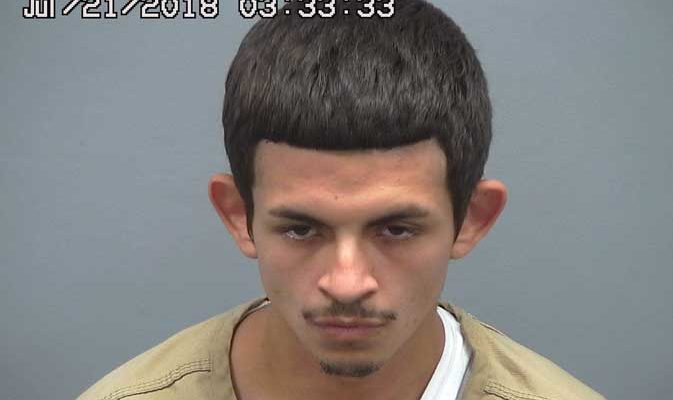 Contributed Photo/Courtesy GCSO: Catarino Palacio, 18, was arrested and booked into the jail on burglary and theft charges.

GRAHAM COUNTY – A man suspected of burglarizing two apartments while the victims slept has been caught.

Catarino Palacio, 18, was arrested Friday, July 20, by Safford officers and was booked into the Graham County Adult Detention Facility on burglary and theft charges.

According to a news release from the Graham County Sheriff’s Office, Palacio became a suspect in two burglaries from the previous day, in which both victims were asleep in their residences.

Graham County Dispatch had received a call from a woman at about 3:29 a.m. on Thursday, July 19, after she awoke to find a man burglarizing her residence at the Eighth Street Apartments.

The woman described the burglar as a male in his late teens or early 20’s, with a slim build and about 5’7” in height. She said one of the items missing from her apartment was a new television set.

A TV was located in an area southwest of the apartment complex and it appeared that the burglar placed it there and returned to the apartment for more items.

Later the same morning, a second burglary at the same apartment complex was reported. In that case, a male victim had both his apartment and vehicle burglarized while he slept.

The same day, Graham County investigators received information regarding a possible suspect and a search warrant for a residence just south of the apartment complex in the 3300 block of Westridge Drive as granted. During the search, some of the stolen property was recovered, according to the release.

Palacio was then identified as the suspect in both burglaries and was located by a Safford Police officer and taken into custody.