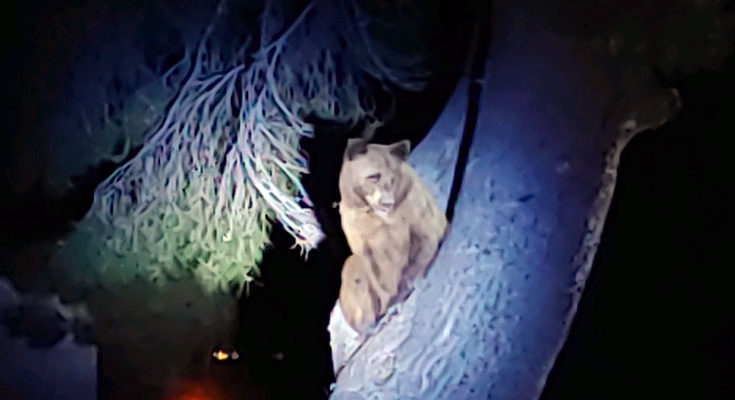 Contributed File Photo/Courtesy TPD: This black bear was treed in Thatcher last May before being tranquilized and removed by the Arizona Game & Fish Department. The bear was then euthanized per department policy.

GRAHAM COUNTY – The springtime is among us and with that comes the possibility of animal encounters, including black bear sightings.

A man called authorities Thursday night at about 6:05 p.m. when he came upon a black bear in his yard off W. Willcox Way, between Central and Thatcher, south of U.S. Highway 70. The closest major intersection is W. Layton Road and N. Webster Road.

According to the resident, he opened his front door and the bear ran away to the north into a ravine.

According to a Graham County Sheriff’s Office report, Arizona Game & Fish did not have an officer on duty, so the deputy searched the area for the bear, however, he did not locate it.

The bear was likely foraging for food. Last May, two black bear encounters in Thatcher and Clifton ended with the bears being killed.

In the Thatcher incident, a juvenile black bear was found roaming around a residential and school area in Thatcher and was captured and euthanized.

In the Clifton incident, deputies with the Greenlee County Sheriff’s Office shot a bear that had been deemed as wandering too close to a residential area. The 5- or 6-year-old male bear weighing about 265 pounds was shot while in the area of Mares Bluff and tumbled down the hillside.

According to Arizona Game & Fish Department Public Information Officer Mark Hart, the department’s policy toward male nuisance black bears is to euthanize them. That policy came about after a young girl was attacked on Mount Lemmon near Tucson in 1996 by a relocated male black bear.

“We don’t relocate male bears that become nuisances or are perceived as dangerous,” Hart told the Gila Herald after last year’s incident in Thatcher. “We have zero tolerance for male bears who get into human-occupied areas or otherwise are a nuisance. Females and cubs are routinely relocated because they are less aggressive.”

The black bear is the only bear species still found in Arizona and generally hibernates from November through March. They are omnivores with a range of between 7 – 50 square miles and mostly live in woodland habitats in Arizona. While they are called black bears, they range in color from black to brown and even blonde in some cases, with males growing up to about 350 pounds and females to about 250 pounds.