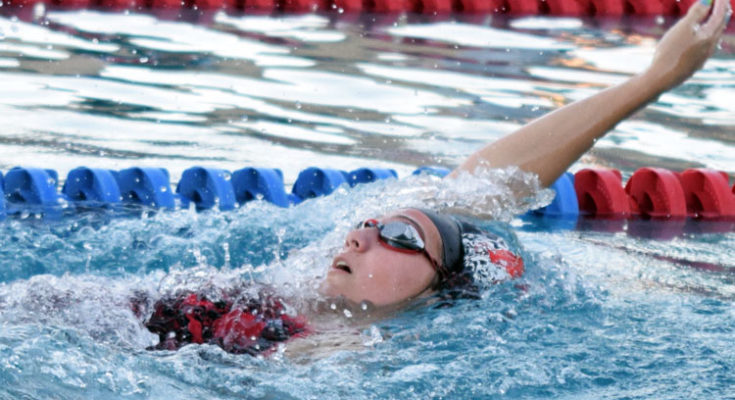 Raymundo Frasquillo File Photo/Gila Herald: Senior Taylee Bayardo finished fourth in the 100 backstroke during the state finals Nov. 3. She was also the state runner-up in the 100 freestyle. Her efforts landed Morenci 32 points for 21st of 32 teams.

PARADISE VALLEY – In short, they try to get from point A to point B in the quickest possible time. They race against the clock, trying to better previous times in their event.

The biggest obstacle facing them is the reflection in the mirror, themselves. The next race is to better a previous time. The people in the other lanes help push them. It is good sportsmanship that they are individually thanked after the heat is over.

Her highest state meet finish was ninth (25.67) for the 50 freestyle and 10th (55.97) for the 100 freestyle during the Land of Enchantment finals in late February. She was part of the 20-member Rio Rancho Cleveland Storm last school year.

Bayardo’s “biggest supporters,” her mother Dana and father Luis, were on hand to share in her accomplishment.

It was not her career-best clocking by nearly a full second, but, “I was happy,” she said.

The first-year Morenci student-athlete was also second in the 100 freestyle with 55.95, behind Division I Tucson Canyon del Oro sophomore Kaylan Ottosen (54.63).

However, other than the time noted, there was no special award presentation. That did not prevent her from brandishing an ear-to-ear smile after finishing her heats.

The possibility of a swim program in Morenci was uncertain when Bayardo moved to Greenlee County with her family. She lunged feet first at the prospect to swim for the Wildcats when the program materialized.

“There has been an opportunity for team bonding, going from town to town on long bus rides to meets,” she said. “I feel cozy.”

She was touched when the team stood by her side while receiving a medal following an event during one of the meets.

Bayardo was pitted with other regional qualifiers for the state meet seeds. The top 24 times in each event were placed into three heats for preliminaries, and the top 16 from those were in two heats for the finals.

How did she feel about her chances at the state meet? “It’s easier to cut time in distances than in sprints,” she said.

One individual plus two relay teams qualified to compete for the state meet during the Southern Arizona Regional Qualifying meet. A provisional time in an event during the season was the entrants’ criteria.

“They were all nervous before the meet,” said first-year Morenci head coach Eric Waananen.