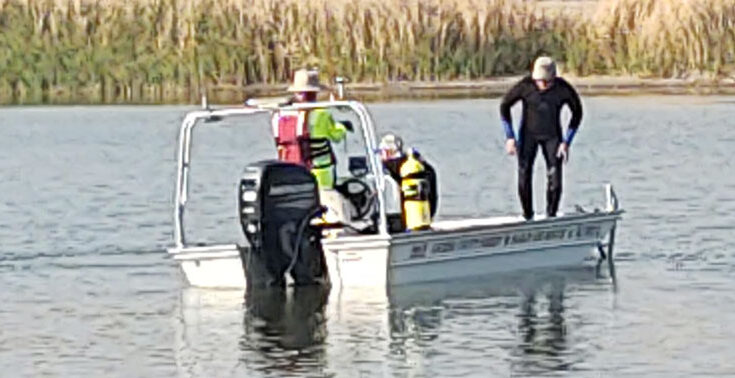 Contributed Photo/Courtesy Cochise County SAR: A dive team with the Cochise County SAR searches Roper Lake to recover the body of a 16-year-old drowning victim. The victim will undergo an autopsy on Wednesday.

GRAHAM COUNTY – An autopsy with the Pima County Office of Medical Examiner has been scheduled for Wednesday for a 16-year-old victim who drowned at Roper Lake on Sunday.

According to a news release from the Graham County Sheriff’s Office, the 16-year-old male was visiting from out of state and was recreating at Roper Lake with a group of other juveniles when they attempted to swim from the island to the north fishing dock.

Deputies with the Sheriff’s Office arrived at the scene at about 2:45 p.m. and the other juveniles were still in the water searching for the victim. Graham County and Cochise County Search and Rescue were then dispatched to assist with the recovery of the body. According to Cochise County SAR, its dive team searched the lake until dark with no success and then searched with an underwater ROV, also without success. The search operation was then suspended until the following day.

On Monday, the search resumed and the victim was located at about 7:15 a.m. more than 200 feet from the north fishing dock. The next-of-kin, who live out of state, were then notified of the discovery. The incident remains under investigation.

“The Graham County Sheriff’s Office, along with all first responders, express (its) deepest sympathy to the family of the victim,” the release stated.