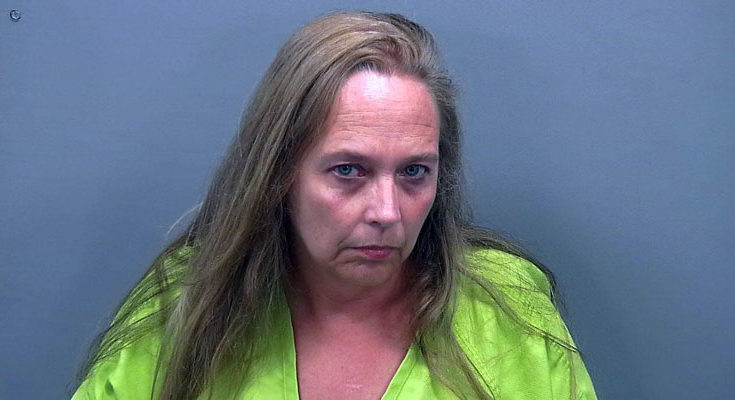 GRAHAM COUNTY – Authorities from the Arizona State Prison Complex-Safford, Graham County Sheriff’s Office and Safford Police Department teamed up to take down a prison drug smuggling ring and intercept a load of methamphetamine and Suboxone from making it in within the prison’s walls.

According to police reports, staff members at the prison learned of a scheme to smuggle methamphetamine into the prison involving inmate David Osborne and his girlfriend, Denise Fry, 53, of California. The scheme reportedly involved Fry dropping off the drugs at a location and a prisoner on work release picking them up and rectally smuggling them back into the prison.

At the end of June, investigators with the Graham County Sheriff’s Office met with a prison official who provided a picture of Fry’s rental vehicle, a dark blue Toyota Corolla with California license plates. Fry had visited Osborn at the prison prior to making the dropoff.

On June 30, investigators located Fry’s car and followed her to the Economy Inn at 225 E. U.S. Highway 70, where a Safford detective kept an eye on it. When the vehicle left the motel, a second woman, identified as Sarah Roberts, 32, was with Fry. Investigators then followed the vehicle as it traveled west to the Pima Cemetery, where Fry exited the vehicle and then returned.

As the Toyota left the cemetery, the Graham County investigator stayed with the car while Safford detectives checked the cemetery to see if Fry had dropped anything off. At one of the gravesites, the detectives located a hidden Walmart bag that contained 1 ounce of meth packed in eight separate bundles in blue balloons, a bundle of unused syringes wrapped in cellophane, a bundle of13 Suboxone strips packed in a green balloon, and an unopened box of Trojan condoms.

By that time, the Sheriff’s Office investigator had pulled Fry over for a traffic infraction of speeding 70 mph in a 65 mph zone and questioned the occupants about their trip. After asking if either of them visited the cemetery, both Fry and Roberts admitted to the drug dropoff.

Fry allegedly told investigators that Osborne is her boyfriend and that she gets paid via a banking app called Zelle to purchase methamphetamine in California and bring it to where inmates on work detail can pick it up and take it back to the Safford prison. Osborne is in prison on burglary charges and is scheduled to be released in January 2022. He was charged with promoting prison contraband and was found guilty July 11. He has since been moved from the Safford prison to ASPC-Douglas – Mohave Unit.

Fry also admitted to having recently gotten into trouble in California when police seized 6 ounces of meth from her residence which she said was not hers. She said she was out on her own recognizance while her charges in that case are pending. She said this was her second time smuggling meth into the prison having succeeded a few weeks prior.

Roberts advised that she was just along for the ride so she could visit her federal probation officer in Flagstaff. She said she was on probation but had been living with Fry. Roberts also admitted that she was a meth user and that paraphernalia of hers was in the car. Roberts also had a number of prescription medications made out to her and her husband in the vehicle.

Fry said she didn’t use meth but smoked marijuana, and claimed some marijuana and paraphernalia found in the car was hers.