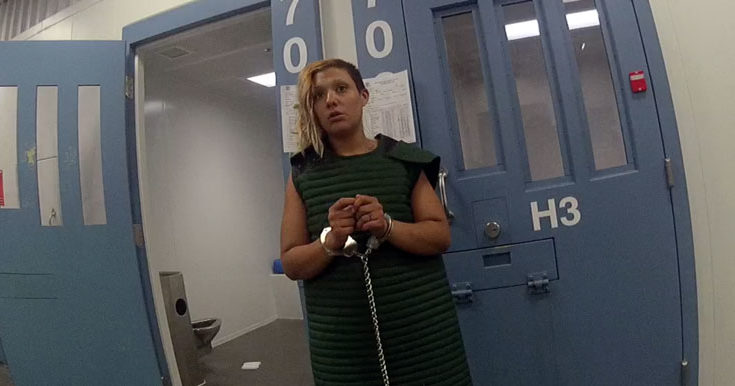 Contributed Photo/Courtesy GCSO: Jorden Simms died after jumping from a moving GCSO vehicle while in transport.

Sheriff and BOS given summons to appear

PHOENIX – Two law firms who represent Deborah Sanchez in the wrongful death lawsuit of her daughter, Jorden Marie Simms, have requested a jury trial for the case and that it not be subject to compulsory arbitration.

Arbitration is a mandatory program for disputes valued under $50,000 in which a court-appointed arbitrator reviews the case to decide a just resolution and award, according to The Judicial Branch of Arizona Maricopa County.

Simms was being transported to the hospital because she claimed abdominal pain resulting from being sodomized by a female detention officer upon her return to the jail after being taken to Sierra Vista for a sexual examination after she claimed she was sexually assaulted by a Safford officer while at MGRMC after her initial arrest.

Previous to her medical evaluation trip, Simms had repeatedly asked her mother on multiple occasions in recorded jail phone calls to bond her out of custody but was denied. Simms spoke of not wanting to be extradited to Yavapai County on her warrant and wanting to spend Christmas at home with her mother instead.

Simms was initially arrested Dec. 21, 2009, and was then taken to MGRMC when she falsely claimed she was pregnant and was having related pains. While at the hospital, she claimed the arresting officer sexually assaulted her by digitally penetrating her vagina. After reporting her claim, she was taken to Lori’s Place in Sierra Vista on Dec. 23, 2019, to have an examination by a Sexual Assault Nurse Examiner (SANE).

While she was at the advocacy center, Simms complained of back and abdominal pain, so the nurse advised that she should get a Cat scan at a hospital to see if there was indeed something inside her and arrangements were made to have the procedure done at MGRMC.

According to the Graham County Sheriff’s Office, an investigation showed Simms had switched the child lock on the Ford Explorer to the unlocked position on the rear driver’s side door and that she had slipped out of her leg restraints, handcuffs, and belly chain by utilizing shower gel she obtained from the restroom of Lori’s Place advocacy center in Sierra Vista. She had been allowed to use the restroom by herself just prior to being transported back to Graham County. The restraints and Simms’ shoes were found in the Explorer where she left them. The vehicle was not the deputy’s normal patrol vehicle but a spare unit that was taken because her regular patrol vehicle’s check engine light had illuminated.

“As a direct and proximate result of the negligence and gross negligence alleged herein. Jorden Simms sustained fatal injuries,” the lawsuit states.

A summons and jury trial request was filed in June, however, members of the Graham County Board of Supervisors were only served with the summons this week. The lawsuit is being handled by Graham County’s insurance pool, which is represented by attorney Daryl A. Audilett of Audilett Law PC, of Tucson.