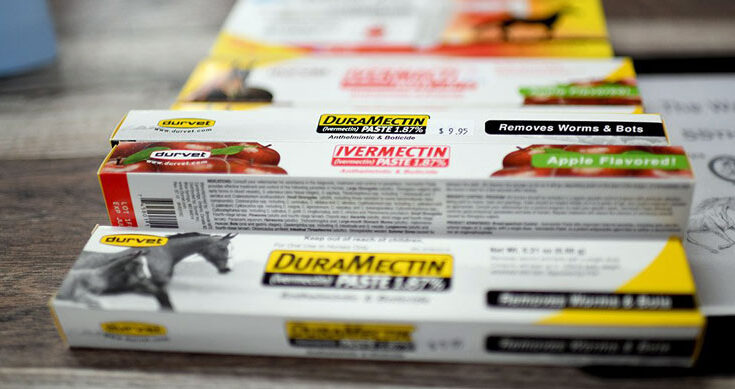 Photo by Kevin Hurley/Cronkite News: In tablet form, ivermectin treats infections in humans caused by parasitic worms, but other forms are used to prevent parasites in large animals, despite warnings that the drug is an unproven COVID-19 treatment, demand has increased for both the human and animal formulations of the drug.

PHOENIX – Prescriptions for the anti-parasitic drug ivermectin have soared amid recent spikes in COVID-19 cases, despite federal warnings that the medication sometimes used to deworm horses should not be used against COVID-19.

Although ivermectin is approved for human use for some conditions, the Centers for Disease Control and Prevention and the Food and Drug Administration have advised against using it for the prevention or treatment of COVID-19 and stress that the drug is not approved for that purpose.

Nevertheless, prescriptions in the U.S. have jumped from a pre-pandemic baseline of 3,600 per week to 88,000 per week in mid-August, according to the CDC. Some people even are taking a form of the drug meant for large animals.

The Western Ranchman, a feed store in north Phoenix, was sold out of the livestock formulation of ivermectin at the beginning of September, owner Amy Jonson said. The store got some back in stock “for who knows how long,” she said, although suppliers are only sending half of what they normally do.

“We have already sold a couple of boxes (in just a few days),” she said.

Ivermectin earned its creators, William C. Campbell and Satoshi Ōmura, a Nobel Prize in 2015. In tablet form, it’s used to treat infections in humans caused by parasitic worms, and it can be used topically to treat head lice. Tablets, as well as injectable ivermectin in liquid or paste forms, are approved in the U.S. to prevent or kill parasites in animals.

The medication’s use against COVID-19 took off last year after Monash University in Australia released preliminary findings that showed the drug had killed the coronavirus that causes COVID-19 in cell culture.

Despite warnings that the drug remains an unproven treatment for COVID-19, demand for ivermectin has been on the rise from Latin America to Ireland.

Social media posts touting the drug’s purported benefits have circulated widely, including an Instagram post from comedian and podcast host Joe Rogan revealing his use of ivermectin and a slew of other medications after his COVID-19 diagnosis.

Amid the debate, calls to poison control centers related to ivermectin exposure have increased threefold this year, according to an Aug. 26 bulletin from the CDC. One person drank a formulation intended for use in cattle and was hospitalized for nine days after suffering confusion, drowsiness, hallucinations, and tremors.

The Banner Poison and Drug Information Center in Phoenix and the Arizona Poison Control System in Tucson have reported an increase in calls reporting adverse reactions to ivermectin or seeking information about the drug. At least one caller required hospitalization.

Dr. Daniel Brooks, medical director of the Banner poison center, said ivermectin continues to be studied in very specific settings – with patients in intensive care or on breathing machines. But he emphasized there’s still no evidence that it’s effective against COVID-19, which has killed more than 650,000 people in the U.S.

“There are some studies that came out that were done poorly and reevaluated. They didn’t show any statistically significant increase in survival or such,” Brooks said.

He added that it’s easier for preliminary or unproven research to circulate nowadays because some studies are published online for free.

“Ten years ago, we used to talk about having things needed to be peer-reviewed in order to get out in the literature and be ready for general consumption,” he said. “And these kinds of fringe, marginal folks have taken advantage of these criteria.”

Once someone goes down the online rabbit hole and begins pulling up ivermectin studies not written by scientists, Brooks said, search engines may automatically display similar information.

Dr. Fred Wagshul, a pulmonologist in Centerville, Ohio, is one of those advocating for the use of ivermectin against COVID-19. Wagshul is a founding member of the Front Line COVID-10 Critical Care Alliance or FLCCC, which describes itself as a nonprofit dedicated to developing “highly effective treatment protocols” to combat the disease.

In August, Wagshul prescribed ivermectin to Jeffrey Smith, a COVID-19 patient in the intensive care unit of West Chester Hospital in Ohio whom Wagshul had not personally treated. According to court documents, Smith’s wife, Julie, sought the treatment after the hospital said it had exhausted all other options.

Julie Smith’s attorney, Ralph Lorigo, said in an interview that Smith’s ventilator was doing 80% to 100% of his breathing before his temporary ivermectin treatment and that was down to 50% as of Sept. 3. Julie Smith is trying to get her husband moved to a Texas hospital where a doctor who is part of the FLCCC Alliance would treat him, Lorigo said.

In a Sept. 9 webinar, Wagshul claimed that ivermectin “kills all the SARS viruses and the variants of the SARS viruses … but the FDA and the NIH, and the CDC refuse to wrap their heads around it.”

But Brooks said the medical community knows what works – vaccines, masks, social distancing, and staying home when you feel sick.

“This is a cautionary tale we need to tell,” he said. “Ivermectin: the short story is, don’t use it.”