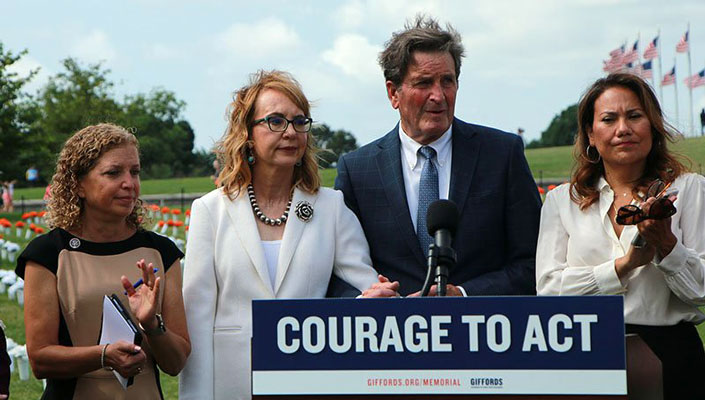 WASHINGTON – Patricia Maisch, a victim of the 2011 shooting in Tucson that killed six and wounded 13, thought for sure that Congress would have been spurred to enact gun reform in 2012 after the mass shooting at Sandy Hook Elementary killed 26.

Instead, Maisch was back in Washington this week, urging Congress to act after mass shootings last month killed 10 people in a Buffalo grocery and 21 people – 19 of them students – at Robb Elementary School in Uvalde, Texas.

“What in the hell is happening?” Maisch asked lawmakers during a Gun Sense rally at the Capitol Monday. “It’s beyond belief that they cannot do anything to stop it.”

She was one of a number of Arizonans in Washington this week to lobby for gun-control legislation, including former Arizona Rep. Gabrielle Giffords, who was severely wounded in the 2011 Tucson attack that killed six people and wounded 12 others.

Giffords rallied with lawmakers and gun-control advocates Tuesday on the National Mall, where organizers had put up a gun violence memorial consisting of 45,222 white flowers representing people who lost their lives to gun violence in 2020. The display included another 5,000 orange flowers to represent more recent gun deaths, including those in Buffalo and Uvalde.

“Fight, fight, fight!” Giffords said to several dozen people on hand for the rally, which included House Speaker Nancy Pelosi and Senate Majority Leader Chuck Schumer. “Be bold, be courageous. The nation’s counting on you.”

Those were just two of a week’s worth of rallies and protests in Washington, as Congress prepares to take up gun reform measures in the wake of the latest shootings.

The House is expected to consider two bills as early as Wednesday.

The Federal Risk Protection Order Act of 2021 is a so-called “red flag” law that would allow police, with a court order, to remove guns from individuals who are determined to be a danger to themselves or others.

The Protecting Our Kids Act includes a number of provisions, including proposals to restrict the sale of large-capacity ammunition magazines, raise the minimum age to buy a semiautomatic weapon to 21, and make it illegal to sell or possess untraceable “ghost guns” and more.

The bills passed out of the House Judiciary Committee last week on a party-line vote after a marathon session in which Republicans complained the bills would infringe on the rights of gun owners while ignoring solutions like more mental health care and more secure school buildings, including the possibility of armed teachers.

But Pelosi on Tuesday said that it is past time for Congress to act.

“We owe the children of our country so much more than excuses why we don’t have legislation,” she said at the event on the National Mall.

The Judiciary Committee vote came the same day that President Biden made a plea for gun reform during a prime-time television address that called on Congress to enact a ban on assault weapons, tougher background check laws, and a higher minimum age of purchase.

“After Columbine, after Sandy Hook, after Charleston, after Orlando, after Las Vegas, after Parkland, nothing has been done,” Biden said, reeling off the names of a number of high-profile mass shootings. “This time that can’t be true. This time we do something.”

Giffords still walks and speaks with difficulty as a result of a Jan. 8, 2011, assassination attempt at a congressional event in Tucson, where she was the Democratic House member representing the district. Giffords, who said she had “seen great courage when my life was on the line,” called on lawmakers to have the courage to act.

“Now is the time to come together and be responsible,” she said on the Mall. “Democrats, Republicans, everyone. We must never stop fighting.”

Maisch was at that 2011 event with Giffords when a gunman opened fire on the crowd. She said she survived by playing dead – a strategy used by a student in the Uvalde shooting last month, according to news reports.

She said the reports from Robb Elementary brought back memories – she still recalls hearing the 33 shots fired in less than 90 seconds by the Tucson gunman – as well as sympathy for the Uvalde girl.

“I can’t imagine the trauma those children felt with those horrible sounds. I know there was something different,” she said, noting that Giffords’ attacker used a semiautomatic pistol while the shooter in Robb Elementary used what was described as an AR-15-style rifle.

Maisch, 73, joined members of the Students Demand Action and Everytown Gun Safety organizations Monday at the Gun Sense rally at the Capitol, where students – many wearing bulletproof vests over their bright red shirts – stood under a banner that said, “Don’t look away.”

As she watched the event, Maisch displayed the nearly 20 bracelets she wears on each arm. Some bracelets identify gun-control measures, some have the names of mass shootings and others have the names of those who have lost their lives to gun violence – a term she rejects.

“I was taught early on they’re not lost,” she said of the victims. “We know where the bodies and the urns are. We didn’t misplace them, we weren’t irresponsible and left them at the park. They’re not lost, they’re murdered. They’re gone.”