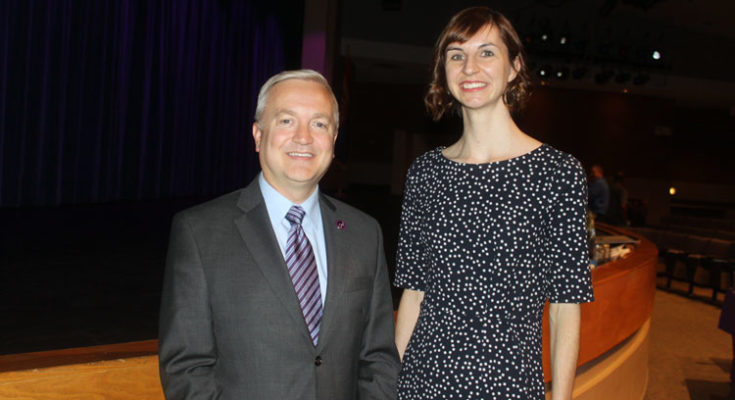 THATCHER – Less than half a year into her first term, Arizona Superintendent of Public Instruction Kathy Hoffman has visited 11 of Arizona’s 15 counties and is already making waves.

On Monday, Hoffman was at Eastern Arizona College to address the Southeast Arizona Teachers’ Academy and meet with teachers and administrators from throughout Graham and Greenlee counties.

As the youngest woman (33) ever elected to state office, Hoffman is a beacon for teachers and administrators who have fought against the Arizona State Legislature to improve school conditions.

Recent studies show Arizona ranks in the bottom 10 percent of states for in-classroom student spending and second to last in teacher pay.

While Hoffman was elated to report $20 million of grant money that was put into the Arizona State budget to be allocated through the Department of Education for school safety – including school counselors – she advised that a new source of revenue is essential to improving schools.

“As a state, we are not regionally competitive,” Hoffman said. “We compare our per-pupil spending and our teacher pay with neighboring states. We are still significantly lower and we absolutely must find a way for a more dedicated revenue source for our classrooms.”

Hoffman did report that the next round of teacher increases following the 20 percent by 2020 plan is still in effect, but that doesn’t include increases for any support staff, paraprofessionals or any of the other “vital” educators who are in classrooms other than the classic definition of a homeroom teacher.

Afterward, Hoffman spoke with the Gila Herald and elaborated on the discrepancy in teacher pay. She said the lower pay ends up causing a teacher shortage because the qualified teachers leave to work in other states, which, in turn, ends up increasing class sizes and the burden on teachers who remain in Arizona. So, in essence, they end up having to work harder for less pay.

Additionally, before the #RedforEd movement and the Legislature’s decision to give percentage raises to teachers last year, teachers hadn’t seen a big boost to their pay for the past decade while other costs, including medical insurance, continued to go up, cutting into paychecks.

“Some teachers were seeing their pay go down,” Hoffman said. “And compared to other careers that require a college education, teachers make a lot less . . . So I think we’ve seen a lot of teachers leaving the field to either go to another profession, leave the state, or sometimes just stay at home with kids because childcare is not affordable either.”

Hoffman also pointed out that a number of teachers plan their pregnancies and childbirth to coincide with summer months because they do not receive maternity or paternity leave during the school year, causing those who become pregnant while school is in session to miss out on a good portion of their paychecks or leave the profession.

Hoffman also reported working on fixing the voucher issue, where the state pays vouchers to students to attend private schools that frequently cost $5,000 to $10,000 per student.

While there are no private schools in Graham County, the system affects our schools locally because the money for the vouchers come from the general fund for all schools.

One aspect Hoffman is changing about the voucher program will, hopefully, curb misuse of the funds. Currently, those accepted are given a debit card meant to pay for the students’ education, but some people have used the cards to pay for material goods, such as big-screen televisions and other items, instead of using the cards to pay for the private schools. By the time the fall school session arrives, there will not be any more debit cards issued and another form of the voucher will be in its place instead.

STEM classes and the arts

Hoffman also said she is working on increasing the availability for students to take STEM classes for those students who might not have access to a high-quality teacher in those fields.

She said she is involved with a coalition to create a network where students can take a class digitally through video conferencing (and even get dual credit if done through a community college like EAC).

“What’s been happening is there is no teacher and then we have a generation of kids who are not prepared for STEM fields,” Hoffman said.

Equally important to student success, according to Hoffman, is classes in the arts.

“I think having music, and art and theatre are especially powerful tools for kids to grow up being well-rounded and have good social skills . . . If you can express yourself through music and art I think it can help you with your other classes because for people who study music it has been shown to help you with math. But I also think it’s a really nice mental refresh. Maybe it helps you refocus in other classes. I’m very supportive of the arts.