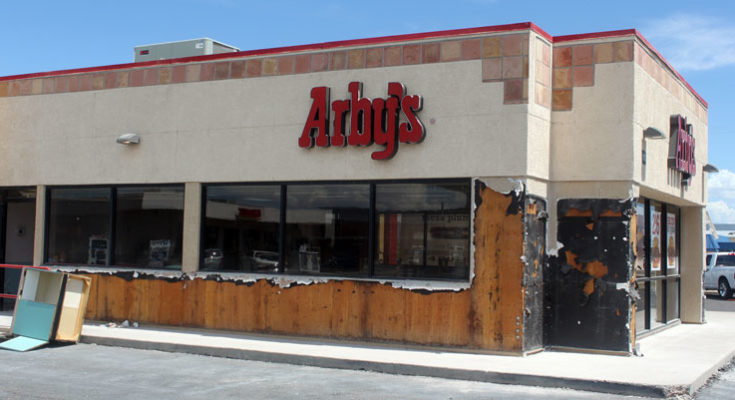 Jon Johnson Photo/Gila Herald: The Arby’s restaurant is undergoing a complete remodel. The location is set to have a grand reopening Oct. 8.

SAFFORD – While it will be a while before people can locally feed their urge for the traditional roast beef or a number of signature sandwiches loved by fans of Arby’s, rest assured the franchise isn’t going anywhere and the work being done at the Safford location is for a complete renovation of the building.

The restaurant at 1720 W. Thatcher Blvd. is closed during the remodel, but has set Oct. 8 for its grand reopening, which will feature free sandwiches, shakes and more.

The location was purchased by FX4 (Fantastic Food Fast and Friendly) in 2008 and Vice President Jay Johnson said he believed the building was the original Arby’s incantation from 1998. FX4 is based in Gilbert and owns and operates 45 Arby’s restaurants – most of them in Arizona, with one in Silver City, N.M. Johnson said the goal was to complete the full interior and exterior renovation in less than three weeks.

“If we pull it off, it will be the fastest renovation we’ve ever done,” Johnson said.

The restaurant’s franchise rights are good for 20 years and to receive a new 20-year license the building must be brought up to current specifications. That means a complete remodel of both the exterior and interior have to be done to continue operating.

“Basically, everything from where we make sandwiches all the way forward will be brand new floor to ceiling,” Johnson said.

He added that the renovated restaurant will have “old school” Edison-style light bulbs in modern fixtures, and will feature a combination of new and modern with throwback features in an open-feeling dining room.

“When they’re done, they just look amazing to me,” Johnson said. “They really have a nice, comfortable feel in the dining room.”

During the remodel, existing Arby’s employees have been tasked with other duties to keep their hourly wages while some are being driven to Silver City in a rented van to work at that location to keep as many hours as possible. The restaurant is also hiring new employees to deal with the expected volume when they reopen.

“For a lot of it, it’s the same menu, same Arby’s food,” Johnson said. “If you are a regular Arby’s customer, you’ll just appreciate the new dining room. If you are a drive-through customer you’ll notice the drive-through experience is probably a little better because there is new communication technology that makes it easier to hear and understand.”