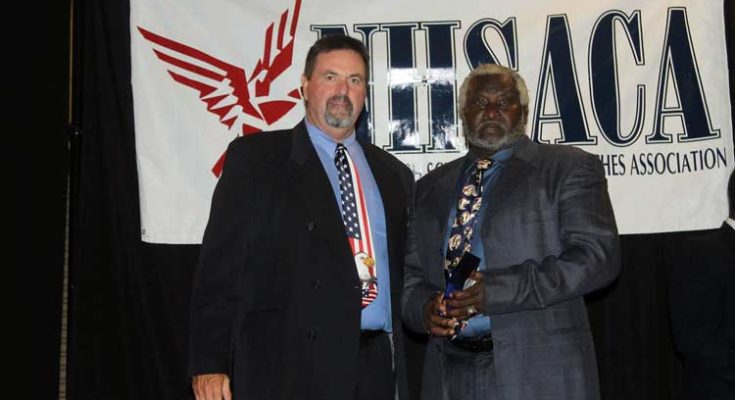 Contributed Photo/Courtesy Herman Andrews Jr.: Herman “BB” Andrews, right, is awarded with his induction into the National High School Athletic Coaches Hall of Fame by a representative of the organization.

Andrews said the honor was the icing on the top of his coaching career that has spanned 40 years at Safford.

“It was a great feeling,” Andrews said. “You think, all the work you’ve done (is) finally noticed by someone . . . It’s a great appreciation to those people who recognize you because you don’t always get that kind of recognition. This was national, so it was just great.”

“That is the ultimate,” BB said. “I know a lot of people get into the hall of fame, but when my son and I both got in there it was a great feeling. I can’t even find words for it to be honest because it just makes it all worthwhile.”

Herman Andrews Jr. was on hand in South Dakota to help his father celebrate, along with longtime teaching associate Peggy Moon, her daughter, Jennifer Moon, who was one of BB’s track stars, and Peggy’s mother, Allison Moon. The Moon family was also on hand earlier in the year for Herman Andrew Jr.’s induction.

BB said the national honor is the greatest he has ever received, followed by his selection by the state of Arizona, along with legendary Safford volleyball coach Norma Bellamy, as coaches of the century.

Safford will have the luxury of having BB around for one more year, which will be his 45th year teaching and 41st year as track and field coach. After next year, BB said he is going to retire to spend more time with his grandchildren.

“That was the icing on the cake,” BB said. “I’m done with it. I just want to thank Safford High School for giving me the opportunity to teach and coach for 44 years in my own hometown where I was born and raised.” 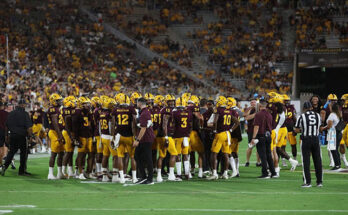