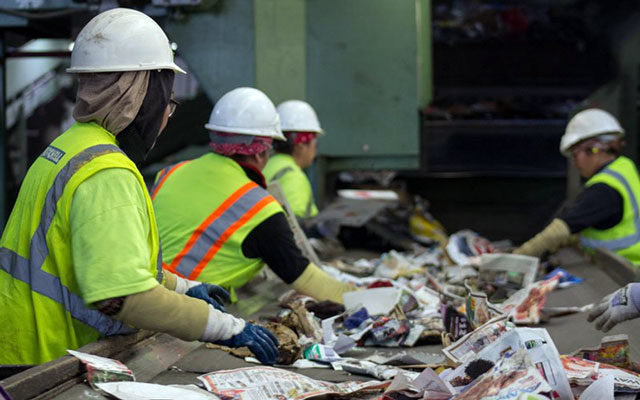 Photo By Miles Metke/Cronkite News: Prices in the U.S. for recycled cardboard are at a decade low since China stopped buying the U.S. product, which directly impacts industry employees like those at the 27th Avenue Transfer Station in Phoenix.

PHOENIX – The U.S.-China trade war has crushed the packaging products industry over the past several months, and there’s no relief in sight. Last week, the Trump administration increased tariffs on several products, including packaging, to 25 percent. On Monday, China announced retaliatory 25 percent tariffs, starting June 1, that also hit paper products.

For Phoenix and other cities in the West, which have been wholly dependent on the U.S.-China relationship to fully process recycled paper, the trade war is not really about trade. It’s about business and a hard lesson in how U.S. and Chinese business owners must work together to keep the industry alive.

Brian Boland started in paper in 1995, right after school, and he has seen dramatic changes. He’s vice-president of government affairs and corporate initiatives at ND Paper, a wholly-owned subsidiary of Nine Dragons Paper Holdings, the largest paperboard company in China and one of the largest in the world.

“People hear that you have got foreign investment coming into the United States, but one thing to remember again, to see growth, and to see investment in these facilities that have been here literally since the late 1800s, it creates jobs,” he said. “It’s really, really cool. It’s really powerful stuff. And regardless of who owns the thing, that investment is a good thing.”

Boland, who started his career in Michigan and now works in ND Paper’s office near Cincinnati, said his plant sounds just like any other U.S. plant.

Boland’s mill had been shut down for decades before it was bought and renovated by ND Paper, which has been quietly buying closed U.S. paper mills, starting with those previously owned by Catalyst, the Canadian paper company that still owns the shuttered paper mill in Snowflake, in east-central Arizona.

With an ongoing trade war with China, these moves are making industry insiders nervous, understandably. But business owners say the paper industry needs to be saved by its operators.

“When I say the business model is broken in the U.S., it is broken,” said Pete Keller, vice president of recycling and sustainability at Republic Services in Phoenix, the second-largest waste company in the U.S.

Seventy-five percent of Republic Services’ business depends on paper. A lot has changed in the past year, Keller said.

“I would say this, relative to recycling, if the material that’s being recovered and aggregated and ultimately marketed isn’t going back into a manufacturing process, isn’t getting reintroduced as some other product, then it is not recycling,” he said.

Prices in the U.S for recycled cardboard are at a decade low since China stopped buying the U.S. product. In January 2018, China established its National Sword policy, an effort to clean up its own environment and reduce pollution. That included drastically changing its import policy on recycled paper, in addition to imposing tariffs on paper products. The global recycling business went into a tailspin, with recycled paper hit particularly hard.

“Those products are not selling at the price they used to, and in some cases, people are paying to move their paper,” said Joe Giudice, assistant public works director for Phoenix. “It’s affecting municipalities, a lot of operations in terms of the revenues they are accustomed to receiving from selling recycling are not there anymore, and so those shortfalls … in budget are things we have to make up.”

China consumes roughly one-quarter of all global paper products. About a quarter of their consumption has been imported because China does not have the natural resources to keep up with its population growth. In 2017, China imported 26 million metric tons of scrap paper. In 2018, that dropped to 15 million metric tons, and 2019 is on pace to drop even more.

Giudice said the solution to the trade problem is not trade negotiations, but with U.S. mills, which need to produce cleaner products across the country. The mills being bought and renovated by Chinese-owned ND Paper already do because they produce paper pulp, a finished product that is contaminant free and can be exported to China as is, even with an added tariff.

“Essentially, they are making their new cardboard boxes or products here in the United States and then shipping them back to China to put the toys and other products that they are manufacturing that are then going to get back in the box and go back to the United States or wherever else people are buying them from, so it’s this very unique international trade situation going on there,” Giudice said.