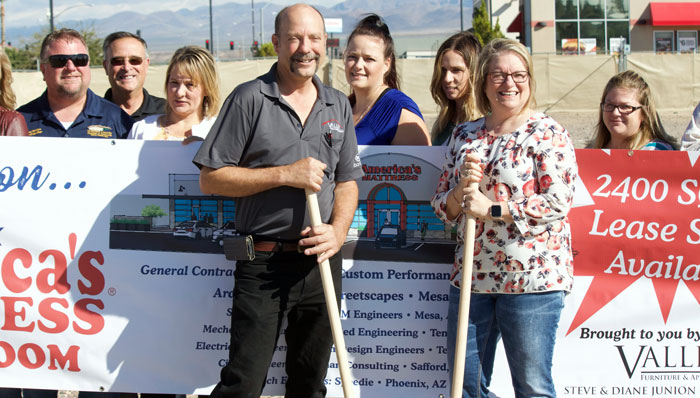 SAFFORD – Come June, there will be a new, specialized store in town where people can find the perfect mattress to enhance their slumber.

If one’s curiosity was piqued about what was going to be built behind the fenced location on the property between Carl’s Jr. and Walmart, wonder no more.

America’s Mattress showroom sleep center broke ground on a 7,200-square-foot facility Tuesday morning. On hand were owners Steve and Diane Junion, along with members of the Graham County Chamber of Commerce Governing Board of Directors.

The building will be built by Brian Hughes and Hughes Custom Performance (HCP) and has an eight-month construction schedule. It will be a metal building with masonry and stone features with a canopy around it and other detail.

The sleep center will feature mattresses by Serta and Simmons and will analyze a person’s sleep habits as part of the process of fitting a person to a custom mattress.

Steve told the Gila Herald that he spent the money to get the best architect and the best contractor to build a top-notch, state-of-the-art sleep center to bring the best products and features to the customers of Graham County.

“We’ll analyze your sleep style and examine that and fit you up with the right mattress,” Steve said.

The building will also feature two 1,200-square-foot bays that will be available for lease much in the same fashion as was done with Copper Hills Dental located nearby at the intersection of 8th Street and 20th Avenue. That building, which was also constructed by HCP,  leases space to a hair salon and insurance agency.

Steve and Diane own and operate Valley Furniture just south of Safford. Steve said the businesses will complement each other and that he will still have other mattresses at his furniture store at 350 Armory Rd.

Steve said he started Valley Furniture all by himself in 1994  by selling furniture in the day and delivering items at night. Now, the business has grown into a large warehouse location with 10 employees and will add at least another three employees to start at America’s Mattress sleep center. He added that the sleep center will bring a new feature to the area.

The Junions celebrated their 24th anniversary Monday, and Diane lamented her hope that this new store will be her workaholic husband’s last big venture.