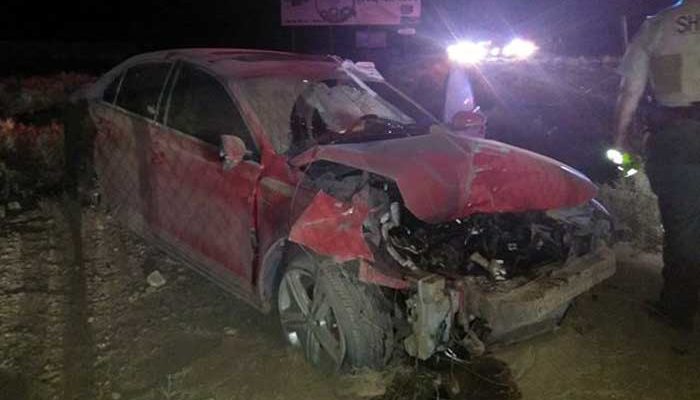 Contributed Photo By Victorya Smith: Alcohol was a contributing factor in a two-vehicle collision early Thursday morning, according to the DPS. This red VW Jetta rammed a white SUV on U.S. Highway 191.

GRAHAM COUNTY – Alcohol was listed as a contributing factor to a crash on U.S. Highway 191 early Thursday morning in which one car rammed an SUV, causing it to roll over off the road.

Darwin James King, 23, of Thatcher, was arrested and booked into the Graham County Jail on charges of DUI and endangerment, with additional DUI charges pending blood test results.

According to a report from the Arizona Department of Public Safety, King was northbound at a high rate of speed on U.S. Highway 191 at about 1:55 a.m. in a red, 2016 Volkswagen Jetta when he came upon a northbound white, 2003 Mercury Mountaineer driven by Victorya Dianna Marie Smith, 22, of Safford, who was on her way to work.

The Jetta was traveling much faster than the Mountaineer, according to the report, and slammed into the rear of the SUV, causing it to veer off the highway to the east and roll over three times. The SUV ended up back on its wheels off to the east of the roadway after traveling through a fence. The crash site was located at milepost 117, which is just about where U.S. Highway 191 splits into four lanes heading northbound.

Smith told the Gila Herald that she remained conscious throughout the ordeal and after her vehicle stopped rolling she climbed out its window and flagged down a passerby on the highway because she couldn’t find her cell phone. The phone was later located about 50 feet from the SUV, according to Smith.

The force of the impact also caused the Jetta to go off the roadway to the east. King, who was initially seen passed out behind the wheel by a witness, ended up suffering a small scrape on his left arm. Smith’s injuries included a bump on her forehead and a black eye. Both subjects refused medical attention at the scene by Lifeline Ambulance paramedics, however, Smith told the Gila Herald that she later was taken to Mt. Graham Regional Medical Center by relatives for treatment.

King allegedly showed signs of intoxication at the scene and was placed under arrest. He was then taken to the Thatcher Police Department, where he underwent a blood draw before being transported to the jail.

Since the collision forced both vehicles off the roadway, they were towed from the scene without interrupting highway traffic. Officers with the Graham County Sheriff’s Office and Safford Police Department assisted at the scene.