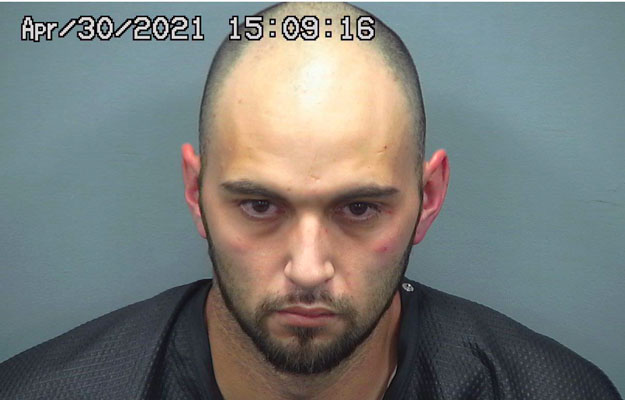 Contributed Photo/Courtesy GCSO: Deryk Martinez, 30, was arrested and booked into jail on charges of possession of a narcotic drug for sale, and possession of drug paraphernalia.

SAFFORD – A man who allegedly admitted to selling drugs in the Safford area was arrested at a local hotel on April 30 after his friend decided to check out early.

Deryk Martinez, 30, was arrested and booked into the Graham County Adult Detention Facility on charges of possession of a narcotic drug for sale and possession of drug paraphernalia.

Officers were initially dispatched at about 10:24 a.m. to the Safford Inn & Suites at 520 E. U.S. Highway 70 regarding an unauthorized person being in one of the hotel rooms.

According to a police report, employees advised that the room had initially been booked for two nights but the renter had asked for a refund for the second night and checked out of the hotel.

The employee said a different man found in the room had been in the shower for hours and was refusing to respond to the hotel’s management.

Safford officers were given a key and made entry into the room. The officers conversed with Martinez, who was still in the bathroom, and then waited for him to exit. According to an officer’s report, the officers waited 11 minutes for Martinez to exit the bathroom and advised hearing the toilet flushing multiple times.

When Martinez did exit, he was questioned by an officer while another inspected the bathroom. The officer quickly noticed an issue with the toilet and discovered a multicolored water pipe and a glass pipe in the toilet’s fill tank. Additionally, a clear baggie was found lying on the floor of the tank and contained five, blue “M30” pills that Martinez allegedly later admitted were fake fentanyl pills.

A further inspection of the restroom’s trash can yielded a grey, round metal container that held an additional 51 “M30” pills and various other bits of drug paraphernalia for both pills and methamphetamine. A black, “plastic” unloaded handgun was also located in the room and secured.

A couple of prescription bottles with the name of the room’s renter were also located in a bag along with aluminum foil with apparent drug residue.

According to the police report, Martinez initially stated he was just trying to hide the items so his friend who rented the room wouldn’t get into trouble but then later admitted to selling the drugs in the Safford area.