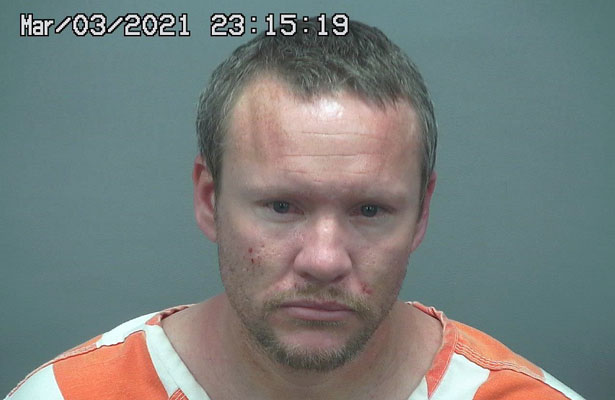 Contributed Photo/Courtesy GCSO: David Seth Isaacs was recently arrested on a warrant for credit card theft and fraudulent use that occurred in 2019.

PIMA – Charges against a wanted man who spent more than a year on the lam have come to fruition.

Roughly 16 months after committing the infraction, an alleged credit card thief has been charged in Graham County Superior Court and so has his sister.

The charges stem from an incident on Oct. 4, 2019, in which a man reported losing his credit card after drinking at his cousins’ house the previous night. The man became suspicious of his cousins had taken his wallet. He then called his bank and learned about several charges made that day that he did not do. The charges were made at two gas stations, Big 5, and Walmart and totaled $443.88. The victim also said he had $300 in cash in his wallet when it went missing.

Video surveillance from the stores showed Isaacs and his sister, Teresa Dyan Isaacs, 40, purchasing the various items along with another man present. David Isaacs was shown actually making the purchases on the victim’s stolen credit card.

Pima Police officers attempted to speak with David Isaacs regarding the theft, however, family members continually insisted he was not present and they could not locate him.

A warrant with a $10,000 bond was issued for his arrest after David Isaacs failed to appear in court for his disposition, and officers warned family members that if they harbored him they could be charged as well.

On Nov. 25, 2020, Teresa Isaacs was pulled over for a traffic violation and David Isaacs was found to be a passenger in her car. David Isaacs fled on foot but was captured and arrested on his warrant. At that time, the Pima officer also requested the Graham County Attorney’s Office file charges against Teresa Isaacs for hindering prosecution in the first degree.

That charge was long-formed and on March 11 a count of hindering prosecution in the first degree against Teresa Isaacs was bound over to Graham County Superior Court.

David Isaacs was arraigned in Graham County Superior Court on Dec. 22, 2020, and his bond was modified by order of the judge and he was given a release order on Jan. 12 and was to be put on pretrial services.

After reportedly failing to adhere to pretrial services, a new warrant was drafted March 3 and David Isaacs was arrested March 4. He had his initial appearance in Graham County Superior Court the same day and most recently had a pretrial conference on March 9 while he stays incarcerated awaiting adjudication.