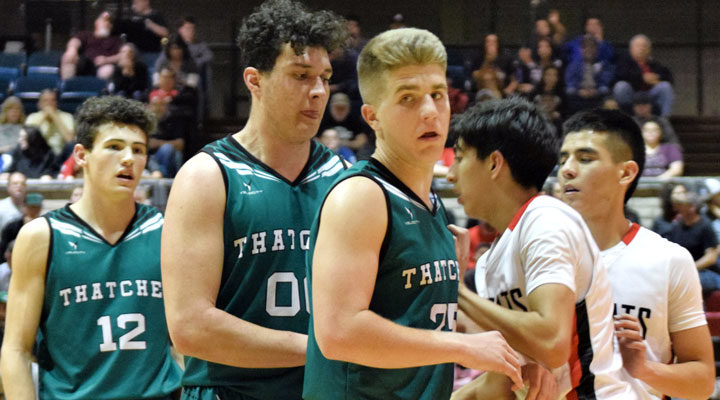 Raymundo Frasquillo File Photo/Gila Herald: Thatcher seniors, from left, Rulon White, Cole Motes, and Matt Palmer await an inbound pass as Morenci sophomore Steven Shawn-Michael Chavez Jr. and senior Jordan Leonard move to their designated areas. The Eagles beat the Wildcats to move on to the state semifinals, which will be played in Prescott Valley as scheduled despite a winter weather advisory.

PRESCOTT VALLEY – All of the scheduled 1A and 2A semifinal and championship basketball games will take place Friday and Saturday in Prescott Valley despite the forecast for severe winter weather and dangerous travel conditions.

Arizona Interscholastic Association Sports Information Coordinator Seth Polansky advised that the decision was made to go forward with the games as scheduled after a conference call Wednesday morning with all of the schools involved.

“To all teams, schools and fans heading to the basketball games this weekend, please be safe on the roads,” Polansky wrote in an e-mail to the Gila Herald. “Allow extra time to reach your destination. Plan a backup route in case your primary route is altered by weather of ADOT.”

The No. 3 Fort Thomas boys team is scheduled to take on No. 2 The Gregory School at 9 a.m. on Friday at the Findlay Toyota Center in Prescott Valley in one of the 1A semifinals.

In the boys 2A semifinals, No. 11 Pima is set to take on No. 2 Alchesay at 12 p.m. on Friday in the Findlay Toyota Center, and No. 4 Thatcher is scheduled to play No. 1 Scottsdale Christian at 6 p.m. at the same venue.

The National Weather Service has issued a winter weather warning for the area through Saturday.