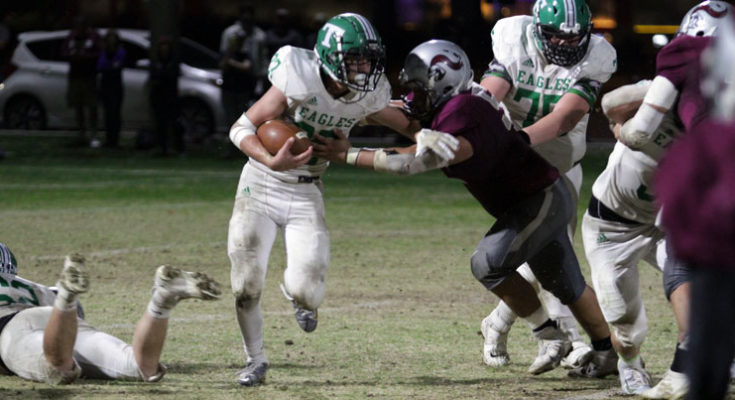 Photo By Stan Bonifacio: Brik Skousen and the Thatcher Eagles moved into the semifinals last year with a 21-7 victory over Trivium Prep. The Eagles will be playing in the 3A Conference next season. They were not one of the schools that appealed reclassification.

PHOENIX – On Monday, the Arizona Interscholastic Association (AIA) – the main governing body for high school athletics in Arizona – won its court case against the three-member schools who were fighting their football reclassifications.

The Maricopa County Superior Court denied an injunction brought forth by the schools regarding the new football reclassification system.

“We are appreciative of the ruling and hope that we can now move forward with not only the scheduling of football games but also with the schools involved in the case,” said AIA Executive Director David Hines. “It was a decision to protect the new competitive balance model voted on by the Executive Board. We never want to go to court to settle any matters with our members. This was unfortunate but necessary to maintain the integrity of the AIA’s rules and regulations.”

When the new classification system was announced advising that some schools would be moved into a higher conference based on performance and not only on enrollment, 18 member schools appealed their classification changes. The ranking system moves schools up or down one conference on a one-year basis.

Phoenix Northwest Christian was one school whose domination in 3A resulted in being placed in the 4A Conference. After its appeal to remain in 3A was denied, the school sued the AIA.

Formerly 3A Queen Creek Benjamin Franklin was also moved up to 4A and also lost an appeal. And formerly 2A Eagar Round Valley (last year’s champion) was moved to 3A and lost its appeal as well. Queen Creek and Round Valley then joined with Northwest Christian in the lawsuit. Locally, Thatcher, which had won three state championships in a row until falling in the semifinals last season, was also moved up to 3A. However, Thatcher moved up not only in football but also in other sports as well and not only on a performance basis. Thatcher did not appeal its reclassification.

Maricopa County Superior Court Judge Lisa Daniel Flores found that the schools failed to prove the reclassification decisions were arbitrary and capricious and that the argument regarding the loss of safety by moving up to a higher conference was not founded. “Football is an inherently dangerous sport,” Judge Flores wrote in her ruling. “Plaintiffs voluntarily chose to play larger schools’ football teams in the years leading up to the reclassification. Plaintiffs’ alleged concerns about the impact of reclassification on safety were speculative and not proved.”

With the court’s ruling, representatives of the AIA conferences will now begin entering football schedules into the online system and all schedules should be ready by the end of the week, according to a release by the AIA. Additionally, recommendations from the Sports Medicine Advisory Committee regarding the return to play will be presented next week.