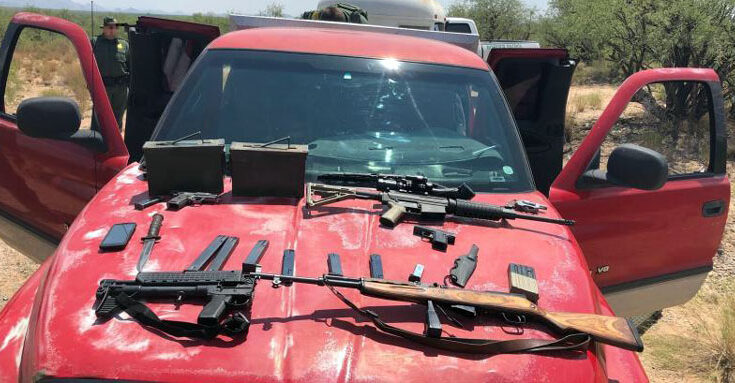 Contributed Photo/Courtesy U.S. Customs and Border Protection: This photo shows the weapons seized in the stop by Border Patrol agents.

Just after noon, Tucson Sector agents patrolling west of Arivaca conducted an immigration vehicle stop on a red Dodge pickup truck hauling a horse trailer. While inspecting the driver, they discovered two men attempting to conceal themselves in the backseat.

The 67-year-old male driver was arrested and faces federal human smuggling charges. The Dodge pickup, trailer, and live horse found inside it were seized along with the weapons and meth.

Of the five illegal aliens encountered, one Mexican national, whom Border Patrol apprehended five previous times, will face criminal immigration prosecution as a persistent offender. The other three from Mexico and one from Honduras will be processed under Title 42 and expelled from the country.