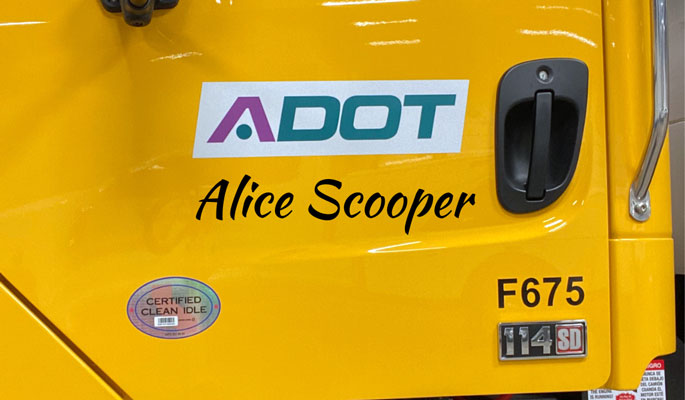 Newly named plows will be sent to Flagstaff, Page, and Superior

PHOENIX – The results of the Arizona Department of Transportation Name-A-Snowplow contest are in and Arizonans have chosen three pun-tastic names for ADOT snowplows.

After tabulating nearly 7,000 votes, the winning snowplow names are:

These three winning names beat out 12 other finalists in ADOT’s first Name-A-Snowplow contest. The names will be affixed to the driver- and passenger-side doors of the truck cab so the snowplows can be identified by name.

“Alice Scooper” will be stationed at an ADOT maintenance yard in Flagstaff, “Snowguaro” will patrol highways near Superior, and “Frost Responder’ will, uh, respond to winter weather from its soon-to-be-home in Page.

ADOT has 200 snowplows and nearly 500 trained snowplow operators at highway maintenance yards across the state, ready to deploy when snow falls. Arizona’s high country can receive a tremendous amount of snowfall – Flagstaff, in fact, is one of the snowiest cities in the country. These snowplows and their skilled operators play major roles in clearing highways during and after winter storms, laying down de-icer prior to storms, and are even put to work during the spring, summer, and fall to push mud, boulders, and debris off highways after rain storms.

Six Months: The Travel ID will be required in 2023