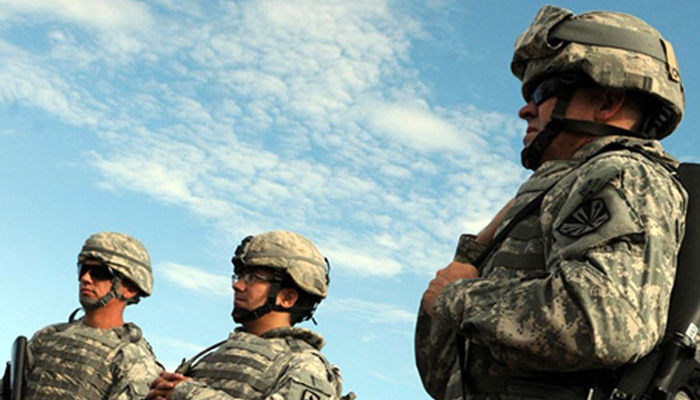 Photo By Staff Sgt. Jim Greenhill/U.S. Army: Arizona National Guard soldiers have provided support at the border before, as in this 2010 photo from Operation Copper Cactus. But in addition to the 2,000 guardsmen currently on the border, the administration said it will send 5,200 active-duty military this week to the Southwest border.

WASHINGTON D.C. – The Trump administration announced Monday that it will send 5,200 active military troops to help “harden” the Southwest border to deter a caravan of thousands of Central American migrants headed north through Mexico.

The departments of Homeland Security and Defense said the first 800 are already on their way to the border, and all 5,200 could be deployed by the end of the week.

They will join an additional 1,000 Border Patrol agents who are deployed or on standby, and more than 2,000 National Guard troops that have been helping at the border since this spring.

Rep. Martha McSally, R-Tucson, said the Guard “was needed and continues to be effective. A larger military presence will provide more assistance at the border.”

“If we had a secure border, caravans of people wouldn’t be making their way to us. We need to close our legal loopholes, fund more technology, more manpower, and a wall,” she said in a prepared statement.

Fellow Arizona lawmaker, Rep. Raul Grijalva, D-Tucson, did not immediately respond to requests for comment Monday but was sharply critical last week when reports surfaced that President Donald Trump might send active military to the border.

“I’ve said it before, and I’ll say it again: Sending troops to the border isn’t just costly and ineffective, it’s a violation of federal law,” Rep. Raul Grijalva, D-Tucson, said Thursday. “The military is barred from participating in domestic law enforcement without special authorization from Congress.

“Make no mistake, President Trump’s actions have nothing to do with security. It’s a political move meant to affect the midterm elections,” he said.

But Pentagon and Customs and Border Protection officials who unveiled the plans Monday insisted that the military would be acting only in a support role and in compliance with the law.

McAleenan said his agency has more than 1,000 agents “at the ready,” including hundreds trained in special operations or riot control, to deploy at and between border crossings. He said Operation Secure Line will also be supported by more than two dozen CBP aircraft for surveillance and response, but that the agency felt the need to reach out to the Defense Department for additional help.

O’Shaughnessy said Pentagon assistance will include Army Corps of Engineers help hardening ports of entry and nearby areas, as well as combat engineer battalions who have expertise in temporary barriers. Assets will include everything from heavy-lift aircraft to 22 miles of razor wire available immediately.

The military will also provide ground and air transportation, surveillance capabilities, medical support and mobile housing for border officers, among other efforts, he said. The plan is to begin in Texas before moving to Arizona and then California, he said.

Sarah Pierce, policy analyst for the Migration Policy Institute, said last week that while “it is against the law for the military to enforce domestic laws,” there may be a way to employ active-duty troops when they arrive at the border.

“We expect many of the members of the caravan to apply for asylum and in recent past, our ports of entry have had a hard time processing those applications,” Pierce said. “If they’re able to put these members of the military to work and help them process these asylum applications faster, then that would be fantastic.”

The Arizona National Guard said in a statement that its mission at the border has not changed since guardsmen were deployed there this spring, and it referred questions to the Pentagon.

Cochise County Sheriff Mark Dannels said he and other local officials met last week with federal officials, including Homeland Security Secretary Kirstjen Nielsen, to talk about security at the border. He said Monday that while he can’t say where caravan might cross the border, he thinks that something needs to be done.

“One thing that I can tell you is the human smuggling across the southern border has gone up 50 percent since last year,” Dannels said. “So, obviously the federal government supported by local and state law enforcement and community leaders, we need to step up and keep our borders secure.”

McAleenan said weaknesses in the border have “incentivized” immigrants to try to cross, and he warned that those who are caught will be prosecuted. For those who say they are fleeing violence at home and seeking asylum in the U.S., he noted that they could just as easily apply for asylum in Mexico.

But the deputy vice president of UnidosUS said that “asking for asylum is not illegal” and should not be treated as such. Clarissa Martinez called the administration’s latest plan “shameful.”

“People who are seeing the images of the families that may or may not make it to the border have seen who we’re talking about,” Martinez said. “I think the president and his administration are trying to fabricate a crisis that is designed to demonize people, to divide us and to distract.”