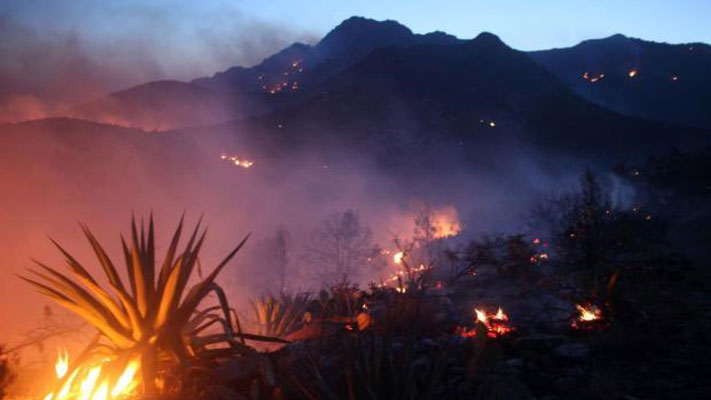 Photo Courtesy InciWeb: The Pinnacle Fire has grown to more than 15,000 acres as of Thursday morning, with 15% containment.

All residences southeast of the fire and north of the Aravaipa/Klondyke Road and Black Rock area were previously given an evacuation notice. On Thursday, residences in the Klondyke/Aravaipa corridor were added to the “Go” status.

According to a news release Thursday, the large column of smoke that was seen over the fire at about 2 p.m. on Wednesday was burning on the interior of the fire lines and within the wilderness on the western side of the fire. The fire perimeter near Black Rock was less active and remained on the ridge south of the ranch. On the southwest side, firefighters continued working to defend constructed fire lines to keep the fire from moving west toward Klondyke.

The fire began June 10 and its cause is currently under investigation. A total of 440 personnel are now assigned to the fire, and aerial suppression techniques, including water drops from four helicopters, are being utilized along with ground suppression efforts that include seven hand crews, 29 engines, 11 water tenders, and four bulldozers.

Both the Coronado National Forest and Bureau of Land Management have issued closures to the area due to the fire, and a temporary flight restriction has been set up around the perimeter as well.

For a detailed outlook of the smoke situation from the Pinnacle Fire and air quality click here.