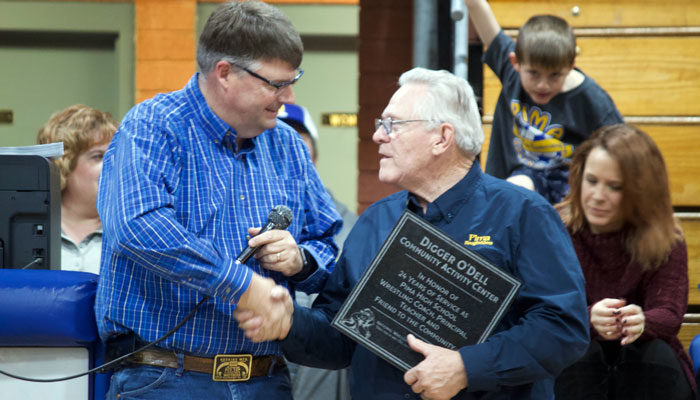 Jon Johnson Photo/Gila Herald: Pima Superintendent Sean Rickert, left, congratulates Digger O’Dell and presents him with the plaque that will adorn the school’s activity center. The facility was renamed as the Digger O’Dell Community Activity Center.

PIMA – Coach, mentor, community leader, hero, Marine; all of these words can be used to describe Digger 0’Dell, and now his name will be etched forever onto a facility he helped dream up that serves as a wrestling practice arena and can be utilized for many different functions in the community.

Just prior to the start of the Gila Valley Invitational Tournament on Saturday, Pima School Superintendent Sean Rickert informed the crowd that the school’s activity center will now be renamed the Digger O’ Dell Community Activity Center. O’Dell coached wrestling in Pima from the 1993/94 season through 2018 and made the team state champions in 1996.

“It is kind of really neat,” O’Dell said. “When I moved here, wrestling was in its infancy. It had only been here a year. And in three years we took state champion. And look at us now. We’ve got a great tournament here.”

According to Rickert, it was O’Dell who first thought about building such a facility.

“When I first started as superintendent, Digger came to me – I think it was like a napkin or a half a piece of paper – and had drawn out this idea for a wrestling room,” Rickert said.

The wrestlers had been searching for a place of their own to practice for some time and had been the vagabond of the school’s sports teams.

“We used to be in the auditorium and then they condemned the auditorium,” O’Dell said. “Then we practiced in the weight room over there.”

Prior to their new facility, the wrestlers spent two years crossing the street to the former cafe to use that building to practice.

“It had a big walk-in freezer and that’s where the girls dressed,” O’Dell said.

The Digger O’Dell Community Activity Center was made possible by two grants from Freeport McMoRan Inc. and while it has been utilized for the last three years, it is just getting ready to move into phase three, which will open its use as a conference room and meeting room.

“The goal was to have a facility that the community can use and that we can also use it for wrestling,” Rickert said. “This year, we were actually able to use that space for classrooms until we get the modules set up and put kids in there. So, it’s something that has been a huge benefit for us, but the primary use for that building is wrestling. It has two locker rooms in it, a wrestling room in it, and really it gives us an opportunity to recognize what Digger has done for the community and for the school and for the wrestling program.”

While the school honored O’Dell with the naming of the wrestling room/activity center after him during the Gila Valley Invitational Tournament, wrestling assistant coach Sean Lewis awarded O’Dell with a couple of plaques for his years of service to the team and announced that the tournament will now be known as the Digger O’Dell Invitational Tournament.

Retired Marine O’Dell has been around the world but has called Pima his home for 25 years.

“It’s been super here,” O’Dell said. “I’ve enjoyed Pima. Some of my best times have been in Pima.”