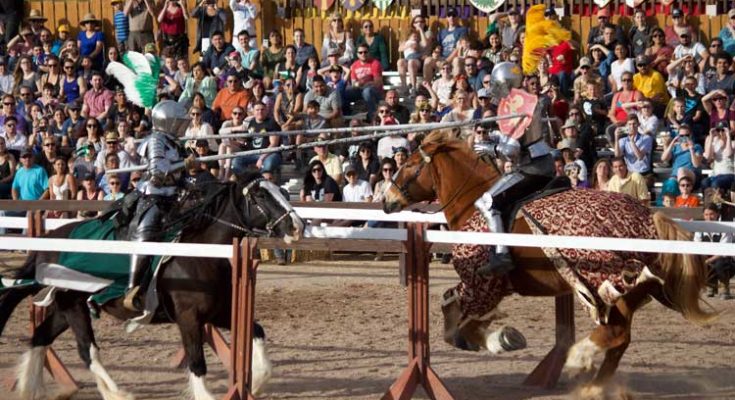 GOLD CANYON – Fun for the whole family, the 30th annual Arizona Renaissance Festival is the epitome of cosplay action. The two-month-long festival is nearly over, however, and those who haven’t experienced it yet this year have just one final weekend, March 30 – April 1, to join in on the fun.

With 13 stages featuring a variety of jaw-dropping acts, a medieval amusement park, more than 200 artisans displaying unique, handmade wares, sweet and savory food to tantalize your taste buds and a 5,000-seat-arena that features a joust to the death all situated in a 30-acre medieval village in Gold Canyon, the 30th annual Arizona Renaissance Festival is a must-see attraction.

Whether it is exciting shows like the Adam Crack Fire Whip Show or daredevil acts, such as Barely Balanced and the joust, comedy acts such as Hey Nunnie Nunnie! or The Ded  Bob Sho, or carnival games and rides, there are performances and things to do for everyone.

Attendees can also marvel at the spectacle of the festival itself, as hundreds of the thousands of people every weekend come in costume and there are many different costumed actors roaming the grounds as well.

One can also see traditional dances performed by the Gila Valley’s own Danseries, led by Gayla Curtis, or their rival dance troupe, the Fairhaven Morris Dancers, who are a Phoenix-based English Folk Dance Troupe.

The festival marketplace offers handmade artisan treasures hard to find anyplace else, and the festival’s assortment of food, including the ever-present turkey legs, is always increasing.

So, be sure to check out the 30th annual Arizona Renaissance Festival during its last weekend and bring home some souvenirs to last you the 10 long months before the festival returns.