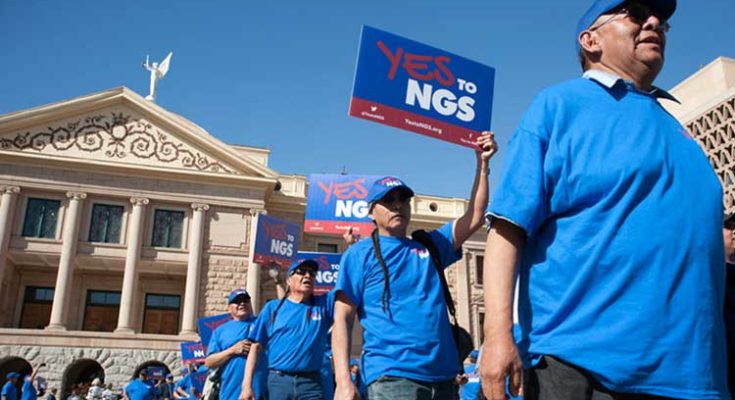 Photo By Jesse Stawnyczy/Cronkite News: Union mine workers, tribal members, and families gather at the Capitol in Phoenix on Tuesday to raise awareness of the potential costs of closing the Navajo Generating Station near Page.

PHOENIX – Shutting down the Navajo Generating Station near Page not only would displace hundreds of workers, it also could raise rates for consumers, protesters who marched on the state Capitol said Tuesday.

“It was built under a bond and paid for by a bond from the federal government. … There’s still a billion dollars left on that bond,” said Craig Stevens, an organizer of the march from DCI Group, a public affairs firm.

“It will be passed onto the ratepayers, the actual consumers of electricity.”

The Navajo Nation and Salt River Project, which operates the coal-fired plant, have agreed to begin shutting it down in 2019. The plant has been under financial pressure because of low natural-gas prices, according to a previous Cronkite News article.

More than 200 tribal members and employees protested Tuesday to raise awareness and encourage people to contact their state and federal representatives to find a solution.

“The goal here today is … to bring awareness to people that if they close (the plant), they’re not just hurting us,” said Dwight Lomaintewa, a driller in the coal mine that supplies the generating station.

Many lawmakers and officials support keeping the plant open, including Secretary of the Interior Ryan Zinke and state Sen. Steve Smith, R-Maricopa.

“I was the first person to stand up when I heard last year about this closing down,” Smith said. “I said, ‘This has got to change. We need it to stay open.’ There are so many people down here fighting. This is important. We are on your side.”

.@Interior is committed to working with all parties, to include current or any future owners, to keep the #NavajoGeneratingStation power plant operational in support of good paying #tribal #jobs. #NGS

Closing the plant would mean the loss of more than 800 jobs, most held by members of the Navajo or Hopi tribes, according to a previous Cronkite News article.

An SRP spokesman said the company will find jobs for every one of its employees.

“We’ve given assurances to them that if they desire, we will redeploy them to other SRP facilities,” Scott Harelson said.

Some protesters, however, said the closure isn’t just about jobs.

“The culture there is like a family atmosphere,” Lomaintewa said. “This is a good culture and working environment, and that’s worth fighting for.”