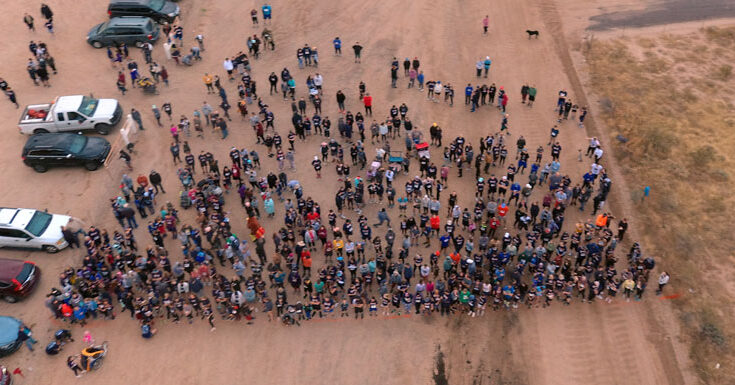 PIMA – The biggest 5K race in Graham County got a little bigger this year as the 16th annual Pima Turkey Trot drew a record 1,001 registered runners – topping 1,000 for the first time in the event’s history.

The family-fun event (which includes a mile fun run) was cofounded by Cody Marshall and Melinda Nelson and draws participants from far and wide as it is a Thanksgiving tradition for those living and visiting the Gila Valley. Marshall and Nelson still run the event, assisted by numerous volunteers and sponsors.

While the event was held last year despite the pandemic, there were slightly decreased numbers. The bounce back to capacity and then some this year produced something else that was also infectious – smiles.

“I think people are ready to get out and it’s a beautiful day,” Nelson said. “We had a great time.”

The event is a fundraiser and the proceeds are donated to Pima Schools for use in some aspect of physical fitness. The race has raised more than $100,000 for that purpose over its lifetime.

After missing last year due to COVID-19, 2019 champions Jonathan Barney, 17, of Scottsdale, and Paige Morales, 22, of Morenci, triumphantly returned with Barney setting a new race record by just three-tenths of a second. The event is a family tradition for both runners, and Barney’s brother Michael Barney won the 2018 race in 16:24.09. Jonathan took family bragging rights in 2019 by finishing first in 16:01.61, and his sister has also placed in past events. His immediate family visits the Gila Valley from Scottsdale for the Thanksgiving holiday.

“I have a lot of family up here, so I thought I’d do the Turkey Trot while I’m here,” Jonathan said. “I like it. It’s a fun course.”

On Thursday, Jonathan blazed his way to the front of the pack and no other racer was within eyesight of his finish. The crowd cheered loudly as emcee Troy Judd advised the course record was within reach. Jonathan pulled into sixth gear and finished in 15:55.44, breaking the former course record by a razor-thin .03. The former record was set in 2016 by Bailey Roth, a track and field collegian from Atlanta, Georgia, who just missed the cut for the 2016 Olympics in the steeplechase.

Overall female winner Paige Morales (20:36.93) also won in 2019 and said has been to the event with her family for the past decade. Morales is originally from Morenci but has been up in Colorado at Adam State College. Besides appreciating the lower elevation, she also was thankful for the time she gets to spend with her family.

“It is my favorite thing (about Thanksgiving),” Morales said. “I love doing this with my family.”

In addition to the overall champions, awards were given in male and female categories in various age groups to the top three finishers in each category and age group. After the race, old race T-shirts were thrown to the crowd and numerous prizes were given away, including the turkey prize to the family with the most race participants.

“Cody and I are just so thankful for all the families coming out,” Nelson said. “It makes for a really fun Thanksgiving morning. It was just a great feeling here. Everybody is just happy and excited and cheering everybody on and the kids running fast and enjoying being with the turkey. It’s just a great day to be thankful.”

After working the event for the past 16 years, Nelson and Marshall show no signs of slowing down and plan to continue the hold the annual tradition far into the future.

“Bring it on,” Nelson said. “Sixteen more plus.”

Click here to view the Gila Herald’s photo album of the race. Visit pimaturkeytrot.com for a complete list of racers and more race photos.