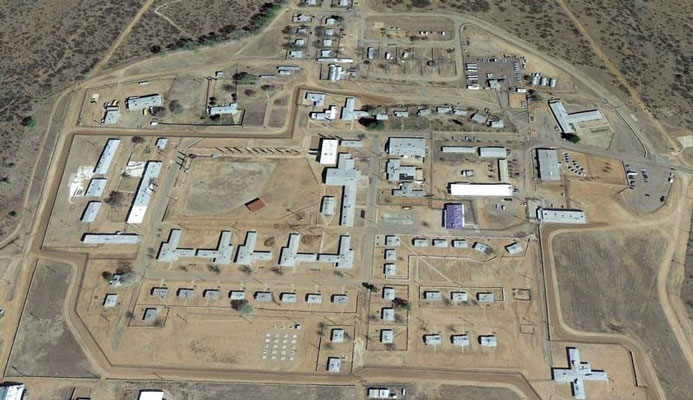 SAFFORD – A contract employee allegedly on his way to work at Arizona State Prison Complex Safford – Fort Grant Unit was arrested for DUI the morning of Dec. 6 after a Safford officer observed irregular driving.

Dominic Amburgey, of Pima, was pulled over at about 5 a.m. while traveling on U.S. Highway 191 (1st Avenue). According to a Safford Police report, Amburgey was seen driving a silver SUV along 1st Avenue and make several U-turns. The Safford officer reported that the second time the SUV drove past him, it came to a complete stop in the far right lane and the vehicle was turned off. It then started back up and made another U-turn as the officer began to conduct a traffic stop.

Upon approach, Amburgey allegedly advised that he was lost and was trying to make his way to Fort Grant Prison. He was dressed in his Arizona Department of Corrections uniform and was wearing his duty belt, according to the report. Amburgey later contacted the Gila Herald and said he was not in a DOC uniform but was wearing work pants with a belt suited to house a radio, along with a white polo T-shirt. He also advised that he was a private contractor working at the prison. Amburgey works for Trinity Services Group, which is contracted to handle meals at the prison.

The Safford officer noted that Amburgey had a laceration on his head near his left eyebrow. Amburgey allegedly advised that he had gotten into a fight the previous night but could not remember with who. Amburgey allegedly said that he stopped in the roadway because he had seen a man having a seizure in the road, however, the Safford officer advised he was parked nearby and did not see or hear anyone else in the area.

During his interaction, the Safford officer also noted that Amburgey had “bloodshot, watery eyes” and “a strong odor of intoxicants emitting from his person.” After failing a field sobriety test, Amburgey was placed under arrest for DUI and was transported to the Safford Police Department for a blood draw. Amburgey’s vehicle was towed from the scene.

After the blood evidence was obtained, Amburgey was transported to his residence and released. Possible DUI charges are pending analysis of the blood and review by prosecutors.

An earlier version of this article identified Amburgey as a corrections officer, he is actually a food service worker with Trinity Services Group which is contracted to handle meals at the prison.